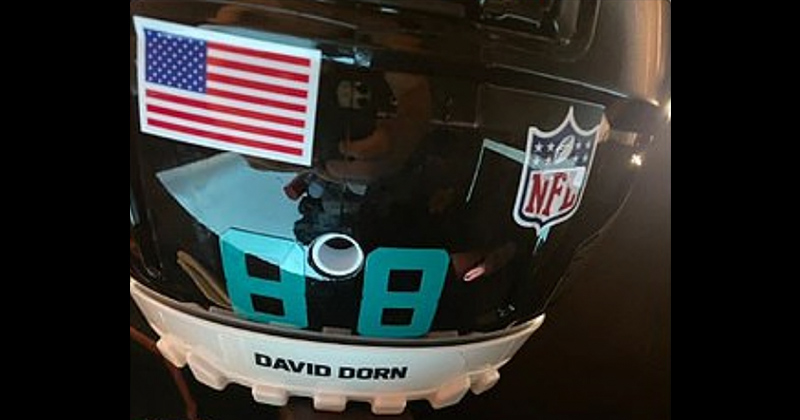 While many NFL players wore the pre-approved names of black Americans killed by police officers on the back of their helmets during the league’s opening day, a member of the Jacksonville Jaguars decided to honor a man who was killed by suspected BLM looters.

The team’s star tight end, a new addition coming over from the Cincinnati Bengals, paid tribute to retired St. Louis police captain David Dorn who was shot and killed while attempting to stop looters from ransacking his friend’s pawn shop.

“Great win to start the season,” Tyler Eifert wrote on Twitter following Sunday’s matchup. “Love being a part of this new team and community! It was honor wearing David Dorns name on my helmet today!”

Great win to start the season. Love being a part of this new team and community! It was honor wearing David Dorns name on my helmet today! #DUUUVAL pic.twitter.com/cJYtadhVuS

The NFL is allowing players to wear decals on their helmets paying tribute to Ahmaud Arbery, Michael Brown, George Floyd, Trayvon Martin and Emmett Till.

Besides those names, the league will also allow the phrases, “It Takes All of Us,” “End Racism,” “Stop Hate,” and “Black Lives Matter.”

Commenting on the tight end’s David Dorn decal, sports radio host Tony Bruno tweeted, “Only true hero in the NFL. Much respect for the courageous stance!”

only true hero in the @NFL. Much respect for the courageous stance!

As of now it seems Eifert may have gotten away with the stunt without any repercussions, but the league is known for fining players who tweak their uniforms.

On a week where dozens of players knelt during the National Anthem or stayed in the locker room completely, only one man stood apart from his peers.