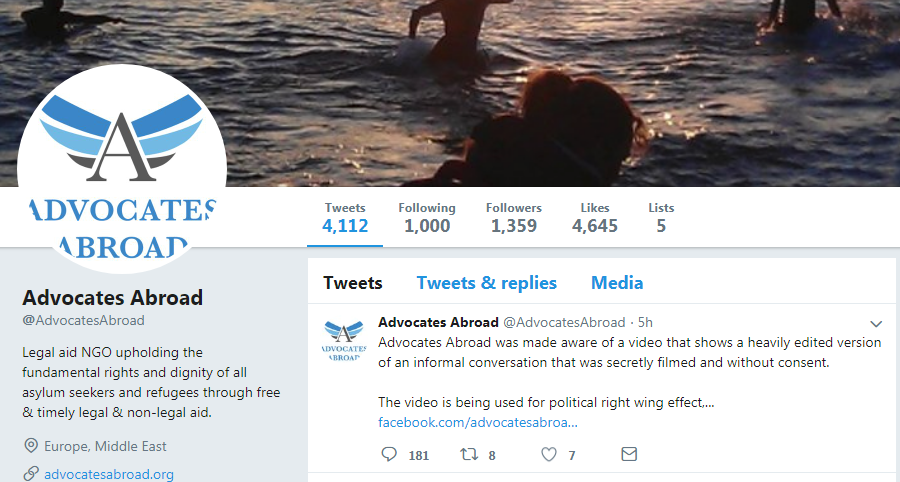 A group that helped over 15,000 refugees and migrants to get into Europe has been caught on tape admitting to systematically training asylum seekers to exploit screening interviews by feigning trauma and persecution.

Ariel Ricker, the executive director of Advocates Abroad, a major non-profit NGO which provides legal aid to migrants, has been caught on tape openly discussing how she teaches refugees to lie to border agents. The video was released by Canadian right-wing activist, author and internet personality, Lauren Southern, and will be a part of her new documentary film project ‘Borderless,’ which takes on the European migration crisis.

On its website, Advocates Abroad claims to have helped as many as 15,000 migrants cross the Greek border, and 2,500 more outside of Greece. The organization is massive, taking volunteers from major universities, and was even featured in a documentary film by the International Bar Association.

In the footage, Ricker describes how the organization provides training sessions for migrants seeking entry into Europe, in which they are taught how to act during interviews with border agents:

She also calls EASO (European Asylum Support Office) personnel tasked with screening the migrants “f***ing stupid,” and describes a formula that the organization has created to exploit them in screening interviews.

One method she teaches migrants is to exploit the presumed Christian sympathies of the predominantly Eastern Orthodox Greece by pretending to have been persecuted for being Christian. She even describes telling them how to pray during interviews, ironically because doing so reflects “honesty.”

At first, the organization responded to the initial release of the video, tweeting:

Since then, however, the group’s Twitter and Facebook page with over 140,000 followers have both been deleted in the wake of the revelations.

The organization, which was founded in 2016, helped to shuffle migrants into a cash-strapped Greece, which was struggling to recover from its long-term government-debt crisis. The majority of migrants seeking entry into Europe first come through Greece, with arrivals peaking in 2015.

Ironically, some of the real victims of the NGO’s tactics are the refugees themselves – the real refugees who were forced to compete with fake candidates trained to game the system. Ricker’s “acting school” even instructed its pupils to feign the emotions of trauma survivors, seemingly without a thought for those seeking asylum who don’t need to pretend to be suffering from trauma.

In the past few years, Greece’s migrant camps have become dangerously overcrowded, resulting in violence and disease which the UN described as having reached “boiling point.” But Advocates Abroad isn’t responsible for maintaining the refugee camps, their only job is getting people through the gate.

Southern claims that the UNHCR has already responded to the tapes by saying that they are “alarmed by these reports,” and the backlash on social media has been understandably strong.