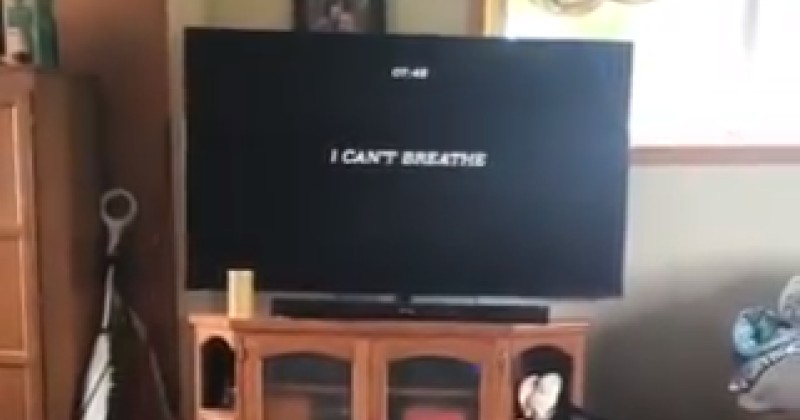 UPDATE: The woman who posted this video has deleted her account after being attacked by an online Twitter mob.

A video clip shows a frightened child asking his mother to turn off a Nickelodeon promo which features the sound of heavy breathing and the words “I can’t breathe” as a corporate virtue signal to recognize the death of George Floyd.

“I hate it, just stop it!” protests the child as the ominous message is flashed on screen accompanied by heavy breathing.

After the child begs his mother to turn it off, she responds, “I will I just wanna see what’s happening here.”

“It scares me,” says the child as he begins to sob.

Obviously, after the clip went viral, the mother was completely ripped apart by a hateful mob of respondents on Twitter.

The children’s network also stopped scheduled programming and went off air for exactly 8 minutes and 46 seconds, the same amount of time the police officer had his knee on Floyd’s neck.

#Nickelodeon thanks. This actually gave my kids comfort pic.twitter.com/F6C1bZiJTt

The stunt is all part of #BlackTuesday, where celebrities and corporations are either posting black squares on social media or virtue signaling some kind of clichéd anti-police, pro-Black Lives Matter message.

As we highlighted earlier, to mark #BlackoutTuesday, Apple froze its ‘browse’ feature and replaced it with a playlist that includes the song ‘F**k tha Police’.

Both Amazon and Nike have also put out statements in support of the “protests,” which have descended into violent riots, despite the fact that Nike stores are being looted and Amazon drivers are being attacked in the street.

Because when virtually every major corporation in America amplifies the messaging and supports the goals of explicitly anti-capitalist and in some cases openly Communist rioters who are simultaneously looting stores, that isn’t strange at all, right?