While the Sahel security crisis continues to deteriorate following Tuareg rebels’ declaration of an independent state in Mali’s troubled northern territory [1], recent events in Nigeria indicate a potential for increased regional instability. Boko Haram, a Salafist organization seeking to overthrow the secular administration of Nigerian President Goodluck Jonathan, has recently killed 38 civilians in a suicide car bomb targeting nearby churches holding Easter services in the northern city of Kaduna [2]. As part of an ongoing campaign of sectarian violence, the group has strived to implement sharia law through the establishment of an Islamic State in northern Nigeria [3]. The group’s belligerent acts of violence claimed more than 500 lives during 2011 [4], prompting President Jonathan to call the current security crisis more dire than that experienced during 1967’s Biafran civil war, adding that jihadi sympathizers have successfully infiltrated his government and security agencies [5].

The group has claimed responsibility for the August 2011 bombing of the United Nations headquarters in the Nigerian capital, Abuja [6], and its adoption of sophisticated tactics indicate that Boko Haram is receiving arms and training from abroad. Mainstream outlets can now be seen readying public opinion for an increased presence in Africa under the Right to Protect Doctrine (R2P) by warning of increased terrorist attacks in Europe, following shifts in Islamist activity away from Iraq and Afghanistan, to the “ungoverned spaces” of the Sahel [7]. While the ongoing War on Terror provides the needed justification for the US Africa Command (AFRICOM) to expand its base of operations throughout the Sahel and the troubled regions of east and central Africa, the modus operandi of Boko Haram indicates foreign nurturing in numerous mediums. 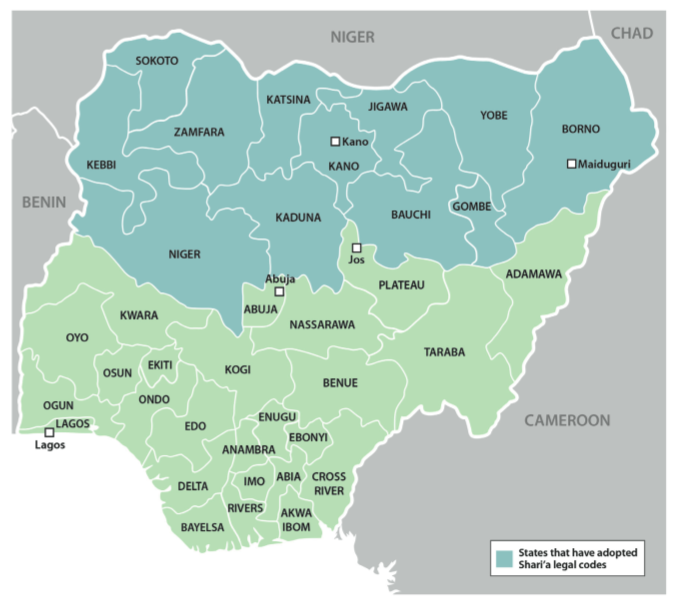 Sharia law through the establishment of an Islamic State in northern Nigeria.

The Nigerian Tribune has reported that Boko Haram receives funding from different groups from Saudi Arabia and the UK, specifically from the Al-Muntada Trust Fund, headquartered in the United Kingdom and Saudi Arabia’s Islamic World Society [8]. During an interview conducted by Al-Jazeera with Abu Mousab Abdel Wadoud, the AQIM leader states that Algeria-based organizations have provided arms to Nigeria’s Boko Haram movement “to defend Muslims in Nigeria and stop the advance of a minority of Crusaders” [9]. It remains highly documented that members of Al-Qaeda (AQIM) and the Libyan Islamic Fighting Group (LIFG) who fought among the Libyan rebels directly received arms [10] and logistical support [11] from NATO bloc countries during the Libyan conflict in 2011. While top AFRICOM General Carter Ham claims terrorist networks pose a “real challenge” to the United States [13], warning of the threat posed by Al-Qaeda and the stock of chemical weapons they obtained after raiding Gaddafi’s weapons bunker [12], the confirmed reports accusing the US of arming and training Islamist terrorist groups remain safely neglected in official Pentagon press statements.

While NATO’s Supreme Allied Commander, Admiral James Stavridis openly acknowledged the presence of Al-Qaeda fighters among Libya’s rebels [14], the New Yorker has recently confirmed that the US has trained members of the Iranian opposition group Mujahideen-e-Khalq in Nevada [15], a US State Department listed terrorist organization (#29) [16] responsible for the recent assassination of Iranian nuclear scientists [17]. As the UN warns that weapons such as rocket-propelled grenades and explosives from Libya may reach Boko Haram [18], armed Tuareg fighters in northern Mali have been seen operating in army issue Toyota Hi-Lux technical trucks [19], armed with mortars, machine guns, anti-tank and anti-aircraft weapons originally belonging to the LIFG, al-Qaeda affiliated Libyan rebels [20]. UN reports also disclose that Boko Haram members from Nigeria and Chad had received training at Al-Qaeda camps in Mali in 2011 [21].

A divided and warring Nigeria ultimately serves the interests of the United States as cited by Zbigniew Brzezinski, top adviser to Barack Obama and leading US foreign policy theoretician. Brzezinski, who co-founded the Trilateral Commission and openly credits himself with the creation of the Afghan Mujahideen [24], has influenced policy that encourages the division of existing nation-states by the succession and emergence of microstates, based on all cultural, ethnic and religious peculiarities. Author and historian Dr. Webster G. Tarpley writes, “For Africa, Brzezinski recommends the so-called ‘micro-nationalities’ concept, which means that national boundaries established in the 19th century should be swept aside in favor of a crazy quilt of petty tribal entities, each one so small that it could not hope to resist even a medium-sized oil multinational” [25].

Following the mass exodus of Chinese business interests during the Libyan conflict, a shattered Nigeria would ultimately create conditions where China’s growing cooperation with Abuja can be challenged and ultimately, disrupted. China has provided extensive economic, military and political support to Nigeria, an important source of oil and petroleum for Beijing. In addition to sponsoring Nigeria for a permanent seat in the UN Security Council [26], China has invested in Africa’s booming telecommunications market by building and launching a geostationary commercial satellite, owned by Nigeria and operated in Abuja, [27] as a gesture of increased partnership between the two nations. In 2010, China and Nigeria signed a $23 billion deal to construct three fuel refineries in Nigeria, adding an extra 750,000 barrels per day of domestic refining capacity [28].

While Algerian intelligence confirms a direct link between Boko Haram and western-financed AQIM [29], Boko Haram spokesman Abu Qaqa claims to have visited Mecca with Boko Haram leader Abubakar Shekau, where the group received financial and technical support from Al-Qaeda in Saudi Arabia (AQAP) [30]. While US officials acknowledge the presence of Al-Qaeda within the militant Syrian opposition [31], the Saudi Arabian Monarchy and other members of the Gulf Cooperation Council (GCC) have created a multimillion-dollar fund to pay salaries to members of the rebel Free Syrian Army, to encourage soldiers to defect from the Syrian military and join opposition ranks [32], as part of an ongoing regime change program. A recently released subcommittee report issued by the United States Department of Homeland Security entitled “Boko Haram: Emerging Threat to the US Homeland” [33] further indicates the long-term objectives of counter terrorism operations in the region. The document reiterates the importance of sensitive resources within the Niger Delta region, and calls for using extrajudicial assassinations and unmanned aerial drone bombardments to combat the growing threat of Boko Haram in northern Nigeria.

The United States Army War College in Carlisle, Pennsylvania conducted a series of African war game scenarios in preparation for the Pentagon’s expansion of AFRICOM under the Obama Administration. One scenario tested the US Africa Command’s capacity to respond to a disintegrating Nigeria on the verge of collapse amidst civil war, by sending 20,000 US troops to battle vying rebel factions seeking to control the Niger Delta oil fields [34]. At a press conference at the House Armed Services Committee on March 13, 2008, former AFRICOM Commander, General William Ward stated that AFRICOM would operate under the theatre-goal of “combating terrorism” to prioritize the issue of America’s growing dependence on African oil [35]. At an AFRICOM Conference held at Fort McNair on February 18, 2008, Vice Admiral Robert T. Moeller openly declared the guiding principle of AFRICOM is to protect “the free flow of natural resources from Africa to the global market”, before citing China’s increasing presence in the region as challenging to American interests [36].

In 2007, US State Department advisor Dr. J. Peter Pham commented on AFRICOM’s strategic objectives of “protecting access to hydrocarbons and other strategic resources which Africa has in abundance, a task which includes ensuring against the vulnerability of those natural riches and ensuring that no other interested third parties, such as China, India, Japan, or Russia, obtain monopolies or preferential treatment.” [37] As covertly supporting terrorist organizations to achieve foreign policy aims appears to be the commanding prerequisite of foreign policy operations under the Obama Administration, Boko Haram exists as a separate arm of the US destabilization apparatus, aimed at shattering Africa’s most populous nation and biggest potential market. As Russia and China continue to assert themselves in the UNSC against calls to intervene on behalf of Syria’s militant opposition, the international community must adequately investigate the sources responsible for orchestrating insurgent activity in the Sahel and reprimand those parties accordingly.