A massive industrial and social backlash against the IMF austerity measures that have threatened to destablize the entire country, bring the nation to its knees 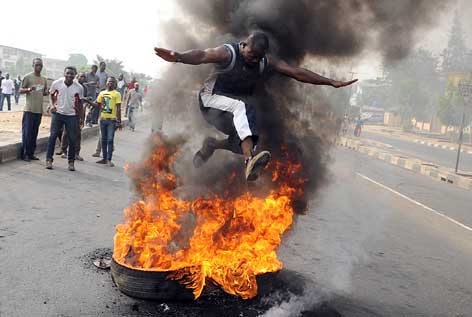 A major oil workers’ union in Nigeria has vowed to shut down all oil and natural gas production in the country if the government will not restore fuel subsidies.

The Petroleum and Natural Gas Senior Staff Association of Nigeria announced on Thursday that it will shut down all production units on Sunday as part of a nationwide strike.

A statement by the association said that if the government does not restore the subsidies, the workers will be “forced to go ahead and apply the bitter option of ordering the systematic shutting down of oil and gas production.”

Tens of thousands of people have been protesting in Africa’s biggest oil producer since the start of the year in response to the removal of the fuel subsidies, which more than doubled the petrol price to nearly 150 naira ($0.93) per liter. The weeks-long violence has left at least 12 people dead in the country.

President Goodluck Jonathan has announced the reduction of petrol prices by 30 percent to 97 naira (60 cents) per liter “after due consideration and consultations with state governors and the leadership of the National Assembly,” but Nigerians rejected the government’s concession insisting on 100 percent restoration of subsidies.

Nigeria produces over 2 million barrels of crude oil per day and is a key supplier to the United States, Europe and Asia.

Jonathan has said that the subsidies on fuel are unsustainable for the populous country.

His government says it will use USD 8 billion in savings to make much-needed infrastructure improvements in the country.