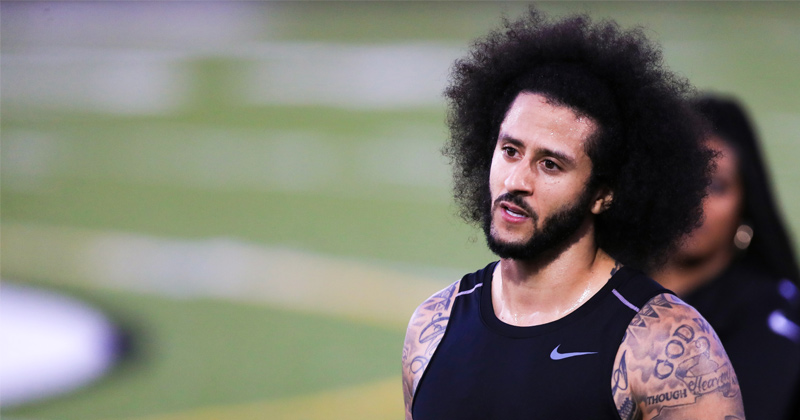 Editor’s Note From Infowars: Nike, who famously pulled the Betsy Ross flag shoes from store shelves last year because Kaepernick didn’t like them in a virtue signaling, anti-American stunt, has now issued a shoe celebrating not standing for the National Anthem.

That’s right in line with the assault on American values by multinational, globalist corporations selling ‘slave goods’ made in sweat shops in South America and Asia.

This is how they piss on the idea that America – and the very idea of self-governance and self-determination – comes before globalism.

It’s critical to get this story out to remind people that there is a war going on against American values and it isn’t an enemy combatant in a battlefield across the world but rather it’s a psychological war being waged by corporations trying to convince Americans that there’s nothing special about the United States.

This falls right in line with what the father of modern political science, Niccolò Machiavelli, wrote:

“And he who becomes master of a city accustomed to freedom and does not destroy it, may expect to be destroyed by it, for in rebellion it has always the watchword of liberty and its ancient privileges as a rallying point, which neither time nor benefits will ever cause it to forget.”

In other words, to subjugate a nation like America that is “accustomed to freedom,” multinational corporations must attack the symbols of liberty, such as the Betsy Ross flag, which really doesn’t have any different connotations than the current US flag with the exception that it was used during the American Revolution – and it celebrated now by conservatives and other patriotic Americans who do stand for the National Anthem.

It’s amazing that Machiavelli wrote the above in the early 16th century, but there’s really nothing new when it comes to the application of statecraft and the subordination of people, whether its by out-of-control politicians or the emergence of corporations acting as a form of non-representational government.

Retailing for $110, the shoes sold out in less than two hours, according to @wwd. pic.twitter.com/zdLi0AabwM

The athletic shoe brand sold out of its new Nike Air Force 1 line, which features a message commemorating the date Kaepernick refused to stand for the national anthem.

On the sole of each right shoe, the date “08 14 16” is emblazoned, marking the date Kaepernick began to kneel while the anthem was played.

CNN reports Nike confirmed the placement of the date, and its significance, to the cable news network.

This comes after Kaepernick successfully influenced the shoe brand to dump its popular Betsy Ross shoes earlier in 2019.

In July, Nike made headlines after confirming it would pull the American flag-emblazoned shoes at Kaepernick’s insistence.

Nike Inc. is yanking a U.S.A.-themed sneaker featuring an early American flag after NFL star-turned-activist Colin Kaepernick told the company it shouldn’t sell a shoe with a symbol that he and others consider offensive, according to people familiar with the matter.

The sneaker giant created the Air Max 1 USA in celebration of the July Fourth holiday, and it was slated to go on sale this week. The heel of the shoe featured a U.S. flag with 13 white stars in a circle, a design created during the American Revolution and commonly referred to as the Betsy Ross flag.

After shipping the shoes to retailers, Nike asked for them to be returned without explaining why, the people said. The shoes aren’t available on Nike’s own apps and websites.

“Nike has chosen not to release the Air Max 1 Quick Strike Fourth of July as it featured the old version of the American flag,” a Nike spokeswoman said.

The “old version of the American flag,” was the Betsy Ross flag, the original American flag design that, according to American folklore, was commissioned by the United States’ Founding Fathers during the Revolutionary War.