After North Korea’s latest nuclear test, scientists are worried that more underground explosions in the isolated country’s rocky north could set the stage for a deadly volcanic eruption not unlike the one that NASA fears could be brewing in the Yellowstone caldera.

Following the North’s sixth nuclear test Chinese authorities have stepped up radiation monitoring and even closed part of their border with North Korea as fallout fears have intensified.

And now, as Newsweek reports, China has limited access to a nature reserve on its border with North Korea after a mysterious series of seismic shakes at the rogue nation’s nuclear test site were detected less than 10 minutes after it conducted its latest test, which also triggered a sizable tremor. The severity of the tremors prompted Beijing to close the site over fears that underground detonations by the North Koreans at a facility near Punggye-ri could lead to rockslides, or worse, trigger an eruption of the active “super volcano” Mount Paektu, according to Disclose.tv.

According to Disclose.tv, the magma and sulfur booms during a supervolcano eruption could kill millions of people in the surrounding area, and potentially endangering all of humanity.

The volcano, which is sacred to North Korea, is located right on its border with China. China’s closure is in effect for a 70-mile-radius around the detonation site. A blast from a super volcano could be catastrophic, with ash traveling thousands of miles, potentially causing hundreds of thousands of deaths

“For the safety and convenience of travelers, we have temporarily closed the southern tourist zone of Changbai Mountain,” read the message from Chinese authorities, translated by UPI. “Officials are thoroughly investigating the safety of the tourist area.” The area will remain closed to the public until “the potential risks disappear,” it said.
But besides radioactive risks, scientists are worried that North Korea’s nuclear tests could disturb could disturb mountains in the Changbai range, along with the still-active Mt. Paektu, triggering the first eruption since 1903. 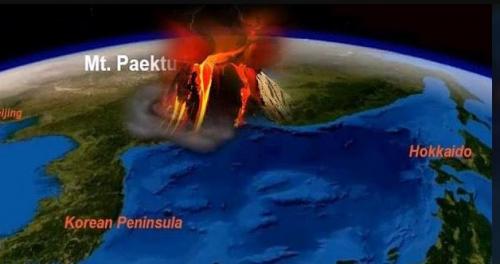 Scientists wrote that it could “disturb the magma chamber of a volcano, thus accelerating the volcanic activity,” scientists argue.

“This is an interesting mystery at this point,” Göran Ekström, a seismologist at Columbia University in New York City, told Nature.
The US Geological Survey estimated the second burst of seismic energy, only eight and a half minutes after the detonation, had a magnitude of 4.1; the detonation itself registered at 6.3. While satellite images do show signs of structural collapse, the movement of rock more closely resembles a landslide.

North Korea is hardly alone in facing a potentially deadly eruption. Recently, NASA scientists have spoken out about the threat of super volcanoes and the risky methods that could be used to prevent a devastating eruption. 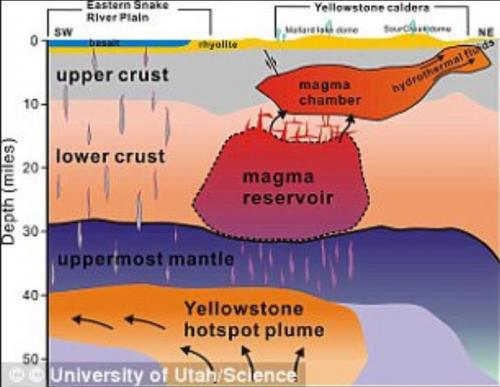 Lying beneath the tranquil and beautiful settings of Yellowstone National Park in the US is an enormous magma chamber called a caldera. It’s responsible for the geysers and hot springs for which the area is known, but for scientists at NASA, it’s also one of the greatest natural threats to human civilization as we know it.

Following an article published by BBC about super volcanoes last month, a group of NASA researchers got in touch with the media to share a report previously unseen outside the space agency about the threat Yellowstone poses, and what they hypothesize could possibly be done about it. As one researcher described it, the threat from super volcanos is much higher than the risk from asteroids

“I was a member of the NASA Advisory Council on Planetary Defense which studied ways for NASA to defend the planet from asteroids and comets,” explains Brian Wilcox of Nasa’s Jet Propulsion Laboratory (JPL) at the California Institute of Technology.

“I came to the conclusion during that study that the supervolcano threat is substantially greater than the asteroid or comet threat.”
So, the agency has devised a plan that could ameliorate the volcano threat. The plan, which has yet to be authorized or implemented, would drill up to 10km down into the super volcano and pump down water at high pressure. The circulating water would return at a temperature of around 350C (662F). Thus, slowly day by day, extracting heat from the volcano. And while such a project would come at an estimated cost of around $3.46 billion, it comes with an enticing catch which could convince politicians (taxpayers) to make the investment.

“Yellowstone currently leaks around 6GW in heat,” Wilcox says. “Through drilling in this way, it could be used to create a geothermal plant, which generates electric power at extremely competitive prices of around $0.10/kWh. You would have to give the geothermal companies incentives to drill somewhat deeper and use hotter water than they usually would, but you would pay back your initial investment, and get electricity which can power the surrounding area for a period of potentially tens of thousands of years. And the long-term benefit is that you prevent a future supervolcano eruption which would devastate humanity.”
Of course, drilling into a super volcano comes with its own risks – in fact, it could inadvertently cause the eruption scientists are trying to prevent.

Talk about a volcanic irony…