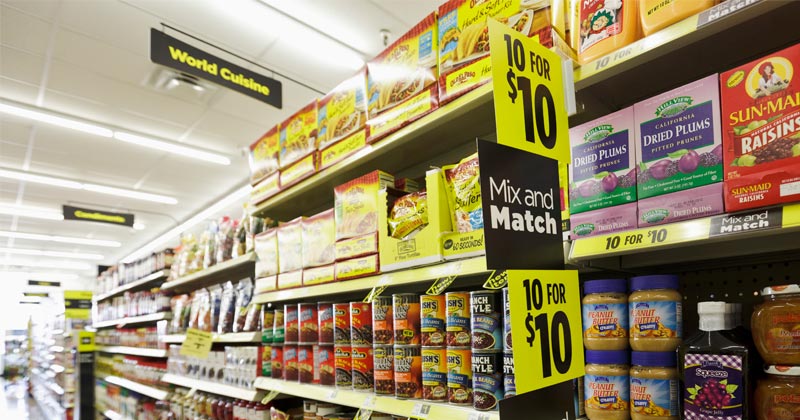 American journalists seem mired in fantasy worlds, at least where it comes to economic analysis, and perhaps we see no greater show of ignorance than in the discussion of the presence of businesses in the poorest areas of inner cities.

Time and again, pundits make the specious claim that people in cities are poor because of the presence of small businesses, such as groceries owned by Korean immigrants .

Today, the targets are the Dollar General and Dollar Tree store, which offer inexpensive goods, along with a wide assortment of canned and dried foods, along with milk, meat, eggs, and frozen foods. Declares Tanvi Misra in Citylab :

It has become an increasingly common story: A dollar store opens up in an economically depressed area with scarce healthy and affordable food options, sometimes with the help of local tax incentives. It advertises hard-to-beat low prices but it offers little in terms of fresh produce and nutritious items—further trapping residents in a cycle of poverty and ill-health.

Misra quotes the Institute for Local Self Reliance: “While dollar stores sometimes fill a need in cash-strapped communities, growing evidence suggests these stores are not merely a byproduct of economic distress; they’re a cause of it.”

This is an interesting and extraordinary claim: the presence of retail stores that make goods available to people who otherwise would have few or no shopping choices at all is the cause of the poverty that grips the regions where these people live. Furthermore, as more of these stores are built and located in the inner cities, the people living there become poorer as a result of the very presence of these businesses.

Misra then tries to clarify her claims:

Dollar stores have succeeded in part by capitalizing on a series of powerful economic and social forces—white flight, the recent recession, the so-called “retail apocalypse”—all of which have opened up gaping holes in food access. But while dollar stores might not be causing these inequalities per se, they appear to be perpetuating them. The savings they claim to offer shoppers in the communities they move to makes them, in some ways, a little poorer.

How does this phenomenon – that Dollar Stores perpetuate and further conditions of poverty – occur? How does making goods available at affordable prices that would not be possible in the absence of such businesses perpetuate poverty? The pundits reply in two words: food deserts.

According to the U.S. Department of Agriculture, a food desert is a part

of the country vapid of fresh fruit, vegetables, and other healthful whole foods, usually found in impoverished areas. This is largely due to a lack of grocery stores, farmers’ markets, and healthy food providers.

Dollar stores, say the critics, sell mostly processed of canned foods and do not have sections providing fresh foods and vegetables. Therefore, according to the “logic” of the left, because a certain class of foods is not sold at these kinds of stores, therefore they are preventing the sale of such food. Leftist journalists and other critics of private enterprise simply claim that because there are Dollar stores in the inner cities and because these stores don’t sell fresh fruit and vegetables, that therefore private enterprise is the cause for creation of so-called food deserts.

This accusation against businesses, however, does not fly with the facts. In recent decades, Korean immigrants have opened many small groceries in cities like Los Angeles and New York City – and often are met with hostility, violence, and outright murder. During the 1992 Los Angeles riots, inner-city residents often deliberately targeted Korean-owned businesses and police refused to protect them, leaving the merchants to arm and defend themselves.

Likewise, during the 2015 Baltimore riots, rioters looted and burned many Korean-owned enterprises , claiming that Koreans were “exploiting” customers. In New York, it was not uncommon for groups tied to Al Sharpton to organize boycotts and violent demonstrations against Korean store owners. The Koreans were people who risked their own resources to bring fresh fruits and vegetables to neighborhoods where such enterprises had not previously existed, but instead faced violence, boycotts, and outright racist rhetoric against their Asian ethnicity. They did so in an attempt to make a living, not out of benevolence, but their risk-taking nonetheless provided opportunities for inner city residents that they would not have had otherwise.

As for food choices, the claim that fresh food (or maybe semi-fresh, given the distances these foods are hauled, especially in winter) food is more nutritious than frozen or canned foods is overblown. The January 27, 2014, edition of the Journal of Lifestyle Medicine said that “fruits and vegetables packaged as frozen or canned are cost-effective and nutritious options for meeting daily vegetable and fruit recommendations in the context of a healthy diet.” In other words, one can both eat healthy and shop at the Dollar Store, leftist accusations to the contrary.

While much of the rhetoric against Korean and other Asian merchants in the inner cities often is hateful, at least no one has carried out “studies” that accuse these merchants of causing poverty where it had not existed before. As one reads Misra’s article and the quotes from the “experts,” one finds a series of contradictory statements and a lack of understanding of basic economic concepts. For example, she writes:

Today, dollar stores are thriving both in the poorest of small rural towns , where environmental changes or globalization have wiped out economic activity, and larger cities like Baltimore, where decades of disinvestment in largely African American communities have left vast tracts barren of retail options. In a recent blog post tracking their rise in low-income parts of Baltimore , planner and architect Klaus Philipsen observes that dollar stores are now “flourishing in many poorer neighborhoods like a parasite.” (Emphasis mine)

The problem is not just the stores themselves. According to the ILSR, they tend to create fewer jobs on average than independent groceries—9 versus 14. The low-wage jobs they do create aren’t of great quality . And it’s not entirely clear if their offerings are that much more affordable either. When economists compared the price of goods like flour and raisins of the same weight, they noticed that dollar store products were higher cost than those at the nearby Walmart or Costco.

Lest one be concerned that Dollar Stores ( according to The Guardian ) are “ripping off consumers with higher prices, Misra also claims the firm is undercutting other businesses with low prices:

Then there’s their negative effect on others stores nearby. When a dollar store opened up in Haven, Kansas—subsidized through tax breaks by the local government—sales at the the nearby Foodliner grocery store dropped by 30 percent, The Guardian reported earlier this year. While the ILSR doesn’t have quantitative data supporting this effect on supermarkets in the vicinity, anecdotally, they surmise that “the difference in margins is just enough that the local stores are not able to stay in business when there are so few options and there is an undercutting of prices,” Donahue said.

The comparison with Wal-Mart is rich. No company has been more accused by the left of malfeasance than Wal-Mart. If Wal-Mart charges low prices and changes the local retail landscape, then the company is said to be predatory. But if Wal-Mart or Dollar Stores charge prices that the pundits deem “too high,” then the stores also are engaged in “predatory” behavior. Furthermore, urban activists time and again have sought to keep stores like Wal-Mart from locating in large cities, but when other retailers move into the void, leftist activist condemn those stores, too.

As for jobs, the purpose of retail stores is to provide goods for customers; no one has touted them as an employment program. However, no matter what leftists might claim , jobs are not the “cause” of poverty. That assumes that people are better off with no income (and no employment) than they are earning money. It is true that retail jobs do not pay very well – something to be expected – but to claim that people are better off having no job, no income, and no available food to purchase than having the presence of a Dollar Store in a city is ludicrous on its face.

So, the American left gives us another set of ridiculous propositions. They demand high-paying jobs but no employers; they demand an abundance of food and other goods, but also demand that no place to sell these items be permitted to be located anywhere.

Dollar Stores are not boutiques, but neither are they the poverty-causing, starvation-producing hellholes that the critics claim them to be. In many urban communities, they are places where poor people can purchase necessities and decent food and snacks. In rural areas and small towns, they mean people don’t have to drive long distances to buy what they need. To put it another way, they serve their customer base well, but it is not a customer base of elite journalists and politicians.