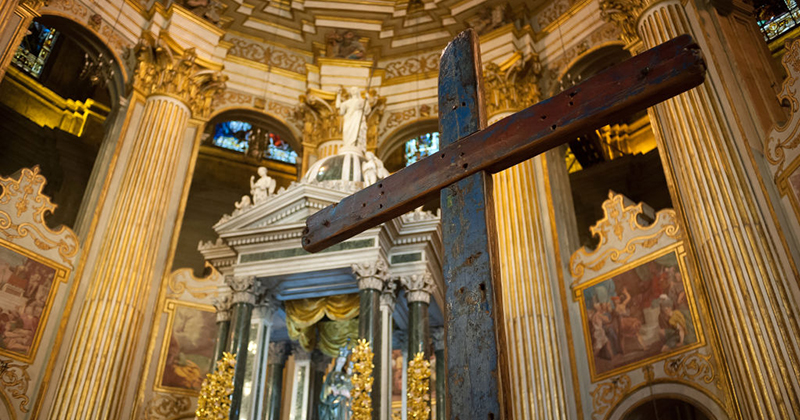 The events of the past couple of days should be a major wake up call for all of us.

The number of mass shootings in the United States hit a record high in 2019 as the thin veneer of civilization that we all take for granted on a daily basis continues to disappear.

And these mass shooters seem particularly attracted to soft targets such as schools and churches.

When I was growing up, I never even imagined that a gunman might storm into my school or church and start shooting.

And as far as I knew, neither my school nor my church had any sort of armed security.

But now if you are attending a church or sending your kids to a school that does not have armed security, you are literally gambling with the lives of your family members.

The world that we live in has dramatically changed, and if we choose to ignore the harsh realities that now confront us, we do so at our own peril.

On Sunday, a gunman opened fire at a Church of Christ in Texas about eight miles away from Fort Worth, and it immediately made headlines all over the nation…

A gunman killed two people during a Sunday morning service at a church in White Settlement before members of the congregation fatally shot him, authorities say.

Police in White Settlement, about eight miles west of Fort Worth, were called before 11 a.m. to the West Freeway Church of Christ at 1900 South Las Vegas Trail after two members who are part of the church’s security team opened fire on the gunman.

What do you think would have happened if nobody in that church had been armed?

The gunman could have just run around the congregation shooting people at his leisure.

I have seen video of the shooting and it is harrowing.  We don’t know what the dark-hooded man wanted, but once he made his move it didn’t take long for him to start shooting…

In the video, the gunman, who is wearing what seems to be a dark-colored hood, gets up from a pew in the back of the room and walks up to a man in a suit who is standing in the corner.

As the two speak and the man points to his right, the gunman reaches into his jacket and pulls out a shotgun.

Of course this kind of thing seems to be happening every few days now, and as a result many of us have become desensitized to this sort of violence.

I just did a Google search for church gunman and I got 23,800,000 results.  The unthinkable has suddenly become a reality that every church in America must deal with.

If you are holding services that are open to the public, you must have armed security.  There is simply no other safe alternative.

And this rise in violence here in the U.S. is happening in the context of rising persecution all over the globe.

On Christmas Day, 11 Christians were brutally martyred by Islamic terrorists in Nigeria, but it barely made a blip in the U.S. news cycle…

Bloodthirsty ISIS terrorists have reportedly beheaded 11 Christian hostages on Christmas Day in Nigeria. The militants said in a sickening video that the mass killing was in revenge for the deaths “of our leaders, including Abu Bakr al-Baghdadi”. Islamic State West Africa Province (ISWAP), which includes supporters from Boko Haram, released a shocking 56-second video. Claiming to show their captives’ execution, the clip was produced by ISIS’s media arm, Amaq, reports the BBC.

Sadly, what we have seen so far is just the beginning.  Thousands of Christians were martyred for their faith in 2019, and the persecution just continues to intensify with each passing year.

Authorities say an Orange County man stabbed five people at a rabbi’s home late Saturday night in Monsey, New York — the latest and most violent in a string of anti-Semitic attacks in the greater New York City area in the last few days.

Ramapo Police Chief Brad Weidel said the suspected attacker, identified as Grafton Thomas, 37, of Greenwood Lake, entered the residence around 10 p.m. armed with a knife. Saturday was the seventh night of Hanukkah and was being widely observed in Monsey, a hamlet that is home to thousands of Orthodox Jews. There were as many as 70 people in the rabbi’s home at the time of the attack.

These precious people were not even meeting in a synagogue.

This gathering was being held in a private home, and you would think that would be safer.

Unfortunately, that was not the case, and the attacker moved from one target to another with brutal efficiency…

We live at a time when anti-Semitic violence is on the rise all over the nation.  Leading up to the attack on Saturday night, there were anti-Semitic incidents in New York state on Monday, Tuesday, Wednesday, Thursday and Friday.  Many in the Jewish community in New York are living in fear at this point, and according to the Washington Post the number of anti-Semitic crimes in New York City alone has “jumped 21 percent in the past year”…

Anti-Semitic attacks are on the rise around the country, leaving members of the Jewish community feeling frightened and unsafe. In New York City, anti-Semitic crimes have jumped 21 percent in the past year. According to the Anti-Defamation League, there were 1,879 incidents of anti-Semitism in the United States in 2018, including more than 1,000 instances of harassment.

But of course this epidemic of anti-Semitism is not just isolated to New York.  Hatred for Israel and hatred for the Jewish people is rising all over the nation, and it is being fueled by extremely evil people that are absolutely seething with hatred.

Have nothing to do with such people.

As global events accelerate and our society becomes even more unstable, attacks on Christians and Jews will become even more common.

We can certainly wish that the world would go back to the way it once was, but meanwhile we have to take the steps that are necessary to protect our families and our communities.