On Tuesday, new Federal Reserve Chairman Janet Yellen went before Congress and confidently declared that “the economic recovery gained greater traction in the second half of last year” and that “substantial progress has been made in restoring the economy to health”.  This resulted in glowing headlines throughout the mainstream media such as this one from USA Today: “Yellen: Economy is improving at moderate pace“.  Sadly, tens of millions of Americans are going to believe what the mainstream media is telling them.  But it isn’t the truth.  As you will see below, there are all sorts of signs that the economy is taking a turn for the worse.  And when the next great economic crisis does strike, most Americans will be completely and totally unprepared because they trusted our “leaders” when they told us that everything would be just fine.

It is amazing how deceived people can be.  Just consider the case of 56-year-old Brian Perry.  He is a former law clerk that has applied for nearly 1,500 jobs since 2008 without any success.  But he says that he is “optimistic” that he will get another job soon because he believes that the economy is recovering…

By his own count, Brian Perry has applied for nearly 1,500 jobs since being let go as a law clerk in 2008. The 56-year old Perry lives in Rhode Island, where the 9.1 percent unemployment rate is 2.5 percentage points above the national average.

Perry remains optimistic that a job is forthcoming. He thinks a more robust economy would create better opportunities for the long-term unemployed like him.

Let us certainly hope that Perry does find a new job soon.  But if he does, it won’t be because we are experiencing an “economic recovery“.  Just consider the following facts…

-Prominent retailers are closing hundreds of stores all over the United States.  Things have gotten so bad that some are calling this a “retail apocalypse“…

— Sears has decided to shut down its flagship store in Downtown Chicago, and it has closed 300 stores in the United States since 2010. Stock analyst Brian Sozzi noted that Sear’s inventory levels have fallen by 23.7 percent since 2006. He also noted that Sears had $4.4 billion in cash and equivalents in 2005 but $609 million in cash and equivalents in 2012. Sozzi, who calls himself a guerrilla analyst, has a blog full of disturbing pictures of empty Sears stores.

— Macy’s, one of the few retail success stories, is planning to close five stores and eliminate 2,500 jobs.

— Radio Shack is preparing to close 500 stores, according to The Wall Street Journal.

— Aeropostale is planning to close 175 stores.

— Blockbuster has closed down all of its stores.

-McDonald’s is reporting that sales at established U.S. locations were down 3.3 percent in January.

-In January, real disposable income in the U.S. experienced the largest year over year decline that we have seen since 1974.

-Only 35 percent of all Americans say that they are better off financially than they were a year ago.

For dozens more statistics that show that the U.S. economy is not improving, please see this article and this article.

Meanwhile, things continue to unravel all around the rest of the globe as well.

In previous articles, I have detailed how the reckless money printing by the Federal Reserve has inflated massive financial bubbles in emerging markets all over the planet.  Now that the Fed is “tapering”, those bubbles are starting to burst and we are witnessing a tremendous amount of economic chaos.  Here are three more examples…

Ghanaian Economist Dr. Theo Richardson says Ghana’s economy will crash by June this year if the Bank of Ghana continues with its kneejerk measures to rescue the cedi.

“The government is facing liquidity problems and if we don’t get the appropriate remedies to address the issues at hand the situation may worsen and by Junethe economy may crash,” Dr. Richardson said.

With only $24.5 billion left in FX reserves after valiantly defending major capital outflows since the Fed’s Taper announcement, the Kazakhstan central bank has devalued the currency (Tenge) by 19% – its largest adjustment since 2009. At 185 KZT to the USD, this is the weakest the currency has ever been as the central bank cites weakness in the Russian Ruble and “speculation” against its currency as drivers of the outflows (which will be “exhausted” by this devaluation according to the bank). The new level will improve the country’s competitiveness (they are potassium heavy) but one wonders whether, unless Yellen folds whether it will help the outflows at all.

In the wake of a global stock market sell-off driven by worries over slower growth in emerging markets, the head of India’s central bank, Raghuram Rajan, criticized the U.S. Federal Reserve as it pressed on with plans to dial back its monthly bond purchases: “International monetary co-operation has broken down,” said Rajan, who added that “the U.S. should worry about the effects of its polices on the rest of the world.”

We have reached a “turning point” for the global financial system.  Things are beginning to fall apart both in the United States and all around the world.

But at least the dogs at the White House are eating well.  Just consider the following photo that was recently tweeted by Michelle Obama… 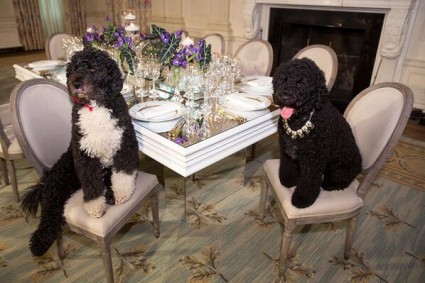 Michael Snyder is the Editor of The Economic Collapse Blog.