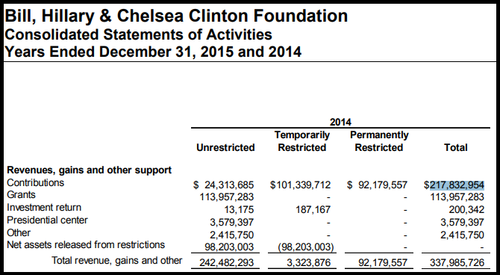 Contributions to the Clinton Foundation dried up by almost 90% in a three year period from 2014 to 2017, according to financial statements.

In 2014, at the height of Obama’s power, the foundation raked in a staggering $218 million in donations.

But by 2017, after Clinton’s devastating election loss to Donald Trump, the organization had collected only $22 million. 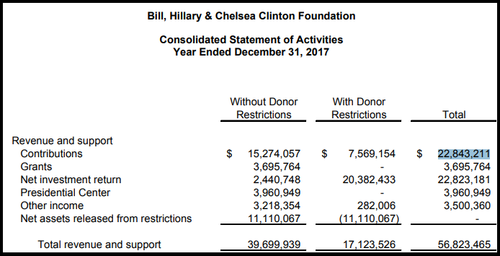 The globalist charity is currently under investigation by several agencies, including the FBI, IRS, and DOJ for a litany of reasons, including pay-to-play schemes and tax code violations.

While Hillary Clinton was Secretary of State, she had the State Department approve a $165 billion arms deal to 20 countries who had donated to the Clinton Foundation, representing almost double the sales made by the Bush administration.

In fact, nearly every government or corporation that made a donation to the Foundation enjoyed some kind of kickback by the U.S. government.

For example, the U.S. approved a major weapons deal to Saudi Arabia after the kingdom donated $25,000,000 to the Clinton Foundation in 2011.

House Oversight Subcommittee chairman Mark Meadows (R-N.C.) said on Wednesday that it was time to refocus on the FBI’s investigation into the Clinton Foundation with the help of several whistleblowers.

“Mr. Huber with the Department of Justice and FBI has been having an investigation — at least part of his task was to look at the Clinton Foundation and what may or may not have happened as it relates to improper activity with that charitable foundation, so we’ve set a hearing date for December the 5th,” he told The Hill.