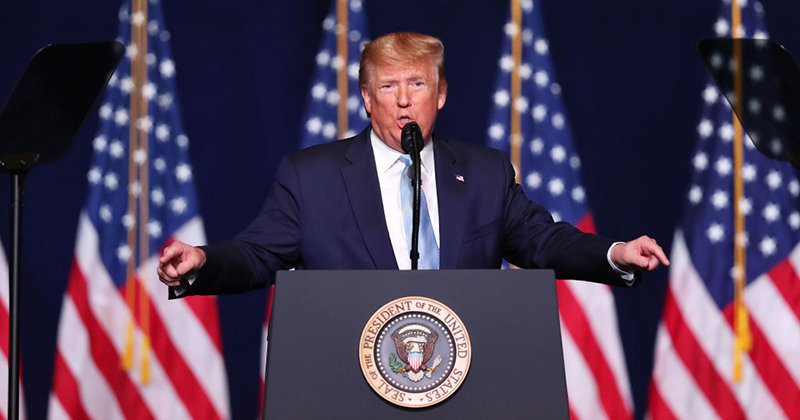 In three short tweets, Trump explained he is done being threatened…

Then reminded his followers just exactly what Soleimani had done…

“[Soleimani] had just killed an American, & badly wounded many others, not to mention all of the people he had killed over his lifetime, including recently hundreds of Iranian protesters.

He was already attacking our Embassy, and preparing for additional hits in other locations. Iran has been nothing but problems for many years.”

Alex Jones discusses why Trump struck Iran and what’s to happen moving forward. Also, start your year right with free shipping and up to 75% off our hottest items during the Mega Blowout Sale!

Then came the warning:

“Let this serve as a WARNING that if Iran strikes any Americans, or American assets, we have targeted 52 Iranian sites (representing the 52 American hostages taken by Iran many years ago), some at a very high level & important to Iran &  the Iranian culture, and those targets, and Iran itself, WILL BE HIT VERY FAST AND VERY HARD. The USA wants no more threats!“

Not quite as aggressive as the “fire and fury” tweet directed at North Korea, but with the red flag of jihad flying in Iran, we suspect they get the message from the US president.

Of course, as Politico’s Rym Momtaz explained earlier, no one knows for sure what happens next, even those who will decide some of the next steps.

The Iranian regime is not suicidal, it is strategic, calculating (even if it miscalculates sometimes), so likelihood of an all-out direct US-Iran war is low.

Khamenei promised response, it must be strong enough to save face internally, for a regime already strained + facing popular dissent, and also be calibrated to avoid provoking a US response inside Iran.

The myth of invincibility that Iran built around Soleimani was a huge recruitment tool, it may also now turn out to be a double-edged sword.

How does its most valiant warrior, its most effective US challenger, get picked off so precisely by the US?

Concern for US military, diplo personnel, and citizens, in the region is legit. But allowing it to dictate policy plays into Iran’s hands which weaponises Western sensitivity to human loss, and war weariness, to further destabilise the region unchecked.

There are many so-called anti-imperialists who always criticise Western intervention but justify Iranian/Russian intervention. Iran is not a legit actor in Iraq/Syria/Leb/Yemen. Its crimes there are no less reprehensible than those by the US or colonialists.

Iran is set to announce its next violations of the JCPOA in next few days. That’s another thing to look out for, other than a military retaliation, in wake of the Soleimani killing. Will it escalate to the point of affecting break-out time or not?

Trump’s warning follows Hezbollah Secretary General Sayyed Hasan Nasrallah’s comments stressing that avenging Soleimani and the other martyrs is a duty of all resistance mujahidin around the world.