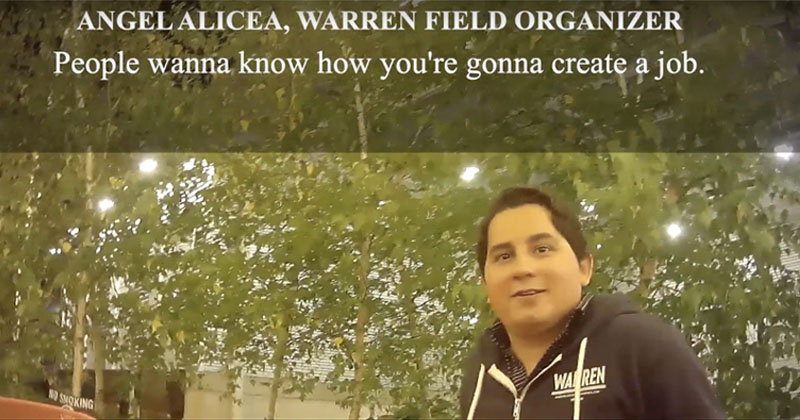 Undercover video from Project Veritas shows a staffer for Elizabeth Warren’s 2020 presidential campaign criticizing her platform for prioritizing gender pronouns over practical issues in hopes of wooing the far-left.

In Part 5 of Project Veritas’ #Expose2020 campaign, Iowa Field Organizer Angel Alicea explains how Warren’s campaign is positioning itself to lose over social justice issues most Americans don’t care about.

“At the end of the day, if we’re gonna prioritize pronouns over making sure people have a decent standard of living, that’s wrong,” Alicea told the PV journalist.

“And it’s like where you come from where I come from, nobody gives a fuck about a goddamn pronoun. People wanna know how you’re gonna create a job.”

“Like, I’ve been called out for saying something like that, but this is why we lose elections, because we’re zeroing on shit like that,” Alicea added.

Warren had promised that if elected, half of her Cabinet would be appointed with women and/or non-binary people.

Warren was last polled in fourth place at 14% in Iowa, far behind socialist frontrunner Bernie Sander at 28%, and trailing Biden (21%) and Buttigieg (15%), according to the latest Emerson poll.

Voting for the Iowa caucus is currently underway.

Warren is an outstanding liar — standing out even amongst politicians. The study she cites proves she wants to CRIMINALIZE, not merely censor, political speech of people with whom she disagrees.