It is well documented that many of America’s Founding Fathers had a very real and deep-seated distrust of standing armies–and for good reason. They had just fought a costly and bloody war for independence, which had been largely predicated upon the propensities for the abuse and misuse of individual liberties by a pervasive and powerful standing army (belonging to Great Britain) amongst them. Listen to Thomas Jefferson: “I believe that banking institutions are more dangerous to our liberties than standing armies.” Note that Jefferson identified both banking institutions and standing armies as being “dangerous to our liberties.” James Madison said, “A standing army is one of the greatest mischief that can possibly happen.” Elbridge Gerry (Vice President under James Madison) called standing armies “the bane of liberty.” 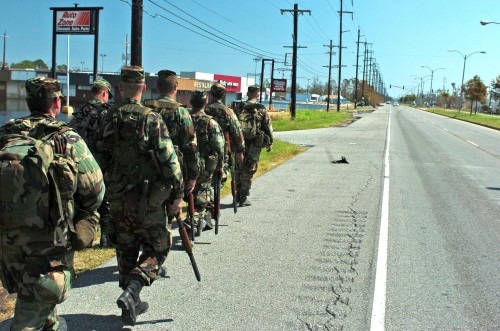 For the most part, the sentiments of our founders ring hollow to modern Americans who, ever since World War II, have glorified, idolized, and practically even worshipped the standing US military. But of course, with only isolated instances (which were almost always completely covered up by the mainstream news media) of the abuse of military power being committed against US citizens, the American people, as a whole, have no point of reference directing them to the sagacity of America’s founders on the subject. Indeed, who could even imagine that US military forces would ever be used against the US citizenry? After all, the media did a masterful job of covering up the most flagrant example of US military forces being used against US citizens when US military forces assisted federal law enforcement agencies in slaughtering the Branch Davidians outside Waco, Texas, on April 19, 1993. So, most Americans simply shut their eyes against that “painful truth” and chose to ignore the fact that it even happened.

“There is a shocking piece of legislation working its way through Congress. A Defense Authorization bill for 2012 allows for military detentions of American citizens on American soil. These can be indefinite detentions, with no trial.”

Bosworth quotes an ACLU (an organization whose efforts regarding the so-called “separation of church and state” issues I strongly oppose, but whose efforts regarding issues that can only be identified as an emerging police state I strongly support) statement as saying, “The U.S. Senate is considering the unthinkable: changing detention laws to imprison people–including Americans living in the United States itself–indefinitely and without charge.

“The Defense Authorization bill–a “must-pass” piece of legislation–is headed to the Senate floor with troubling provisions that would give the President–and all future presidents–the authority to indefinitely imprison people, without charge or trial, both abroad and inside the United States.”

1) Explicitly authorize the federal government to indefinitely imprison without charge or trial American citizens and others picked up inside and outside the United States;

(2) Mandate military detention of some civilians who would otherwise be outside of military control, including civilians picked up within the United States itself; and

Bosworth also notes that, “The bill was drafted in secret by Sens. Carl Levin (D-Mich.) and John McCain (R-Ariz.) and passed in a closed-door committee meeting, without even a single hearing.”

Bosworth goes on to say, “Even mainstream, apolitical Americans would be concerned about such a provision that, on its face, is unconstitutional. Ordinary Americans are already waking up to the specter of tyranny, and the NDAA for 2012 would accelerate that process.”

Near the conclusion of Bosworth’s report, he states, “As many Americans know, for over a decade there have been dozens of pieces of legislation and executive orders that have chipped away at the US Constitution, specifically at its Bill of Rights.

“The ‘war on terror’ was originally to be waged against foreigners in far-away lands, but Rep. Ron Paul was right, the anti-terror infrastructure is swinging around to be used against American citizens.”

I well remember when my friend LT CDR Ernest “Guy” Cunningham conducted his “Combat Arms Survey” to 300 active-duty Marines at the USMC’s Air-Ground Combat Center, Twentynine Palms, California, back on May 10, 1994. A couple of questions in this survey were especially revealing (and startling). John McManus picks up the story at this point: “One of the questions asked the Marines if they would be willing to be assigned to a ‘national emergency police force’ within the U.S. under U.S. command. The survey showed that 6.0 percent strongly disagreed, 6.3 percent disagreed, 42.3 percent agreed, 43.0 percent strongly agreed, and 2.3 percent had no opinion.”

Commenting on these results, Cunningham said, “Do you realize that 85.3 percent agreed with assigning troops to a mission that violates the Posse Comitatus Act?” Remember, these were active duty Marines back in 1994.

Responses to another question were even more startling. Cunningham’s question: “Consider the following statement: I would fire upon U.S. citizens who refuse or resist confiscation of firearms banned by the U.S. government.” The result: “42.3 percent strongly disagreed with this statement; 19.3 percent disagreed; 18.6 percent agreed; 7.6 percent strongly agreed; and 12.0 percent had no opinion.” This equates to approximately 61% of Marines saying they would defy orders to turn their weapons on US citizens in order to disarm them; 26% saying they would not disobey such orders; and 12% refusing to say one way or the other, which means you could probably add them to the 26% who would not disobey orders to turn their weapons on American citizens.

Not too long ago, I asked a retired US Army Major General what he thought the results would be today if CDR Cunningham gave that same survey to US Marines? He said he thought that the number of those refusing such orders would be much higher and the number of those complying with such orders would be much lower. Given the Levin/McCain bill currently working its way through the US Congress, I sure hope he’s right! And I also hope that we modern Americans were not wrong to discard our founders’ distrust of standing armies.