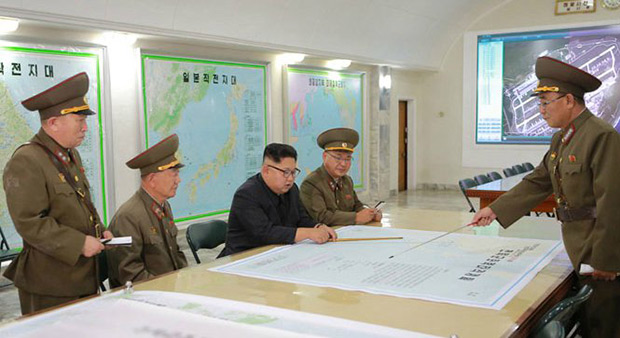 North Korean leader Kim Jong Un announced he would not move forward with plans Tuesday to launch missiles near the Pacific Island of Guam.

Kim, who threatened last week to potentially send four Hwasong-12 intermediate-range ballistic missiles into waters off the U.S. territory’s coast, said plans to do so were on hold unless “the Yankees persist in their extremely dangerous reckless actions.”

“If the Yankees persist in their extremely dangerous reckless actions on the Korean Peninsula and in its vicinity, testing the self-restraint of the DPRK, the [North] will make an important decision as it already declared,” Kim said.

North Korean state media asserted that Kim’s decision followed a visit to a military command post where he reviewed an attack scenario prepared by senior officers.

The announcement from Kim also called on the U.S. to “stop at once arrogant provocations against the DPRK and unilateral demands and not provoke it any longer.”

In response to Kim’s statement, U.S. Secretary of State Rex Tillerson told reporters Tuesday that the United States remains open to talks with the regime.

“We continue to be interested in finding a way to get to dialogue but that’s up to him,” Tillerson said.

As noted by North Korea expert Ankit Panda, Kim’s announcement to step back from a potential attack, while not at all unexpected given its severity, may not be easily explained away by U.S. deterrence alone.

“First, by deciding not to proceed with the launch, Kim appears to have expressed an intent to deescalate,” Panda writes at The Diplomat. “Tuesday’s statement includes a paragraph that begins ‘In order to defuse the tensions and prevent the dangerous (sic) military conflict on the Korean peninsula’ and goes on to open the door to an exchange on equal terms with the United States — something akin to the ‘freeze for freeze’ proposal that has seen Chinese and Russian backing recently.”

Kim’s statement, Panda further argues, sets up “a highly provocative coercive bargaining scenario” that still leaves the threat to strike near Guam on the table.

While potentially coincidental, no B1-B patrols were carried out in the Korean Peninsula between Kim’s threats against Guam and Tuesday’s announcement.

“North Korea had specifically underlined B-1B flights as its chief concern, prompting it [to] prepare for preemptive ballistic missile strikes against Guam,” Panda adds. “The U.S. decision not to fly B-1Bs may have been happenstance, in this case; flights tend to occur with an interval greater than seven days.”

Although a back-and-forth of bellicose threats between Kim and Trump continue on the forefront, reports indicate that both countries have spent the past several months communicating through a diplomatic backchannel.