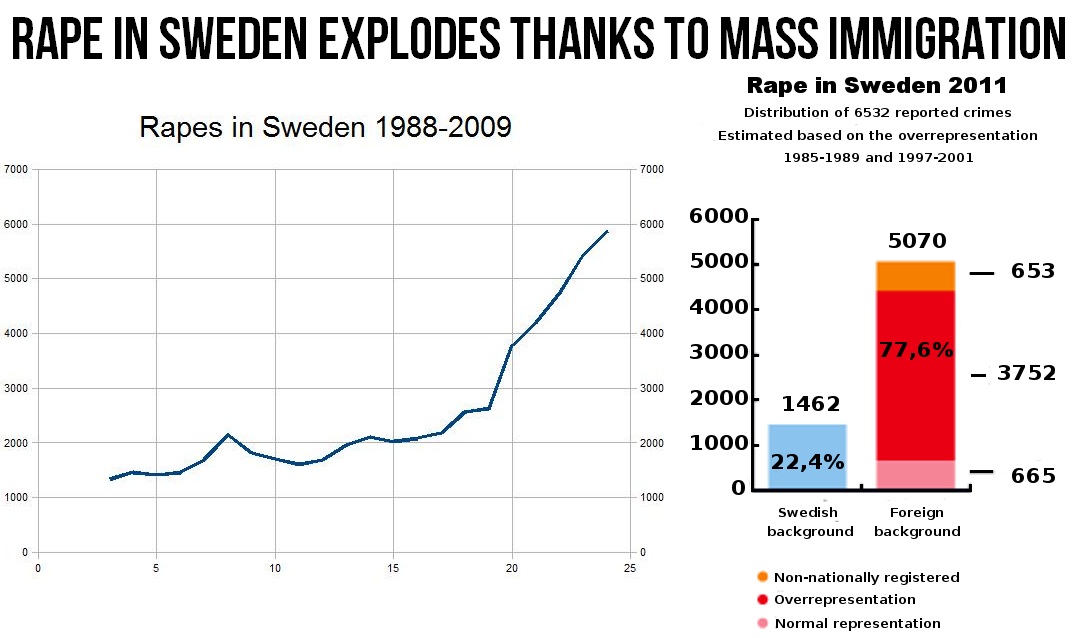 A police chief in Norway has done the unthinkable: he pointed out it’s perfectly reasonable to be “xenophobic” towards people who commit hugely disproportionate amounts of crime.

A Norwegian police chief has spectacularly broken ranks to express his professional opinion that high and sustained levels of crime committed by migrants more than justifies concern about foreigners, and that increasing immigration “leads to more rapes”.

Validating his point, the senior officer said on his force in any given week in 2016 they might witness in the low-crime country “three Middle Eastern men in police custody” for drug offences, “foreigners” arrested for other drugs offences, stabbings, and  robberies.

Pettersen said that in the year of 2015 he personally signed off 2,600 days of custody for detainees in his area — 2,200 of which were for “foreign men”. In one Norwegian prison — Ullersmo — he said half of all prisoners were foreigners, up from 30-per-cent in 2014.

Perhaps coming in for officer Pettersen’s most stinging criticism were the politicians who opened the doors to mass migration. Remarking that “Women and children are sacrificed on Asylum and Refugee Department’s altar”, he said politicians last summer had sought to “outbid each other” on how many asylum seekers the country could accept. He said if the politicians had been more rooted in “reality”, they would have seen long before that allowing more migrants would “lead to more rapes and other serious violations”.

On the coverup of migrant crime seen across Europe — notably in Germany, where local government in Cologne ordered reports be changed to hide the migrant nature of hundreds of attackers who molested and raped woman on New Year’s Eve and in Sweden where police no longer report the identities of criminal to avoid accusations of racism — the officer was scathing. He said: “The secrecy is in my opinion a betrayal of [the public]. The public has a right to know the challenges the police face — not to mention who commits most of the crime”.

Concluding, the Police Inspector said his primary concern isn’t xenophobia in Norway, but rather that “more people aren’t worried” about migrant crime and asylum seekers.

The term “xenophobia” is comically stupid when used against civilized Europeans who have some of the low crime rates in the world.

Is it rape-o-phobia not to want your kid to be around convicted child rapists?

Is it homicide-o-phobia not to want convicted murderers in your neighborhood?

Why then would it be “xenophobia” not to want Third World migrants who commit crimes at highly disproportionate rates to come live in your country?

Like the chief said, these migrants are filling up the prisons despite being just a small portion of the population. The same is true all over Europe and the same is true here in America as a brief look at the LAPD’s Most Wanted list will show you.