Non-profit organizations have launched a project called “Sanctuary Restaurants,” aimed both at shielding illegal aliens from potential challenges to their immigration status and to advance new “definitions” of gender.

The site’s mission statement reads: “Sanctuary restaurants have a zero tolerance policy for sexism, racism, and xenophobia. We believe that there is a place at the table for all… Sanctuary Restaurants offer support and resources to workers, restaurants, and consumers to help create the world we want to see – a world free from hate, discrimination, and harassment.”

The organization caters to the LGBT community, inviting “people of all genders, gender identities and gender expressions,” along with their primary objective to protect the “rights” of “immigrant workers.” While legal immigrant workers share the same rights as natural-born American citizens, illegal immigrants are not entitled to those rights – a concept leftists often fail to understand, or actively work to undermine.

“Latinx” is a new term created by pronoun-obsessed SJWs, and is meant to replace the gender connotations of “Latino/Latina.”

“Latinx, pronounced ‘La-teen-ex,’ includes the numerous people of Latin American descent whose gender identities fluctuate along different points of the spectrum, from agender or nonbinary to gender non-conforming, genderqueer and genderfluid,” explains Latina.com

SanctuaryRestaurants.org offers a ‘Resources’ page for workers that encourages them to challenge employers who attempt to verify their work authorization, likely in anticipation of renewed enforcement of immigration laws by the Trump Administration.

A downloadable “Know Your Rights” flyer is also available, to be referenced “In the Event of a Raid or Immigration Action” – 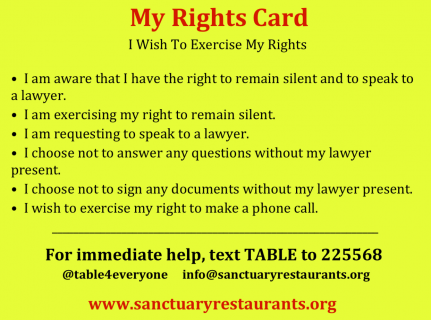 Estimates put the number of illegal aliens working in the restaurant industry at around 1.3 million out of 12 million overall workers, according to ROCU’s own admission.

A Pew Research study in 2008 found that approximately 20% of all restaurant cooks were ‘undocumented immigrants,’ and that over 8 million illegals were in the U.S. labor force, a number that inevitably increased during the Obama presidency.

It is no secret that, while immigrant workers are arguably necessary in the service industries, illegals who fly under the radar drive down wages for all employees in the sector, and also enable both illegal employee and law-breaking employer to skirt tax and insurance rules that businesses operating lawfully are not able to avoid.

Sanctuary Restaurants have no legal standing for their cause, which amounts to nothing more than virtue signaling and thumbing their noses at the rule of law, but it does serve as an excellent resource for the U.S. Immigration and Customs Enforcement agency, whose staff will soon be tripled.