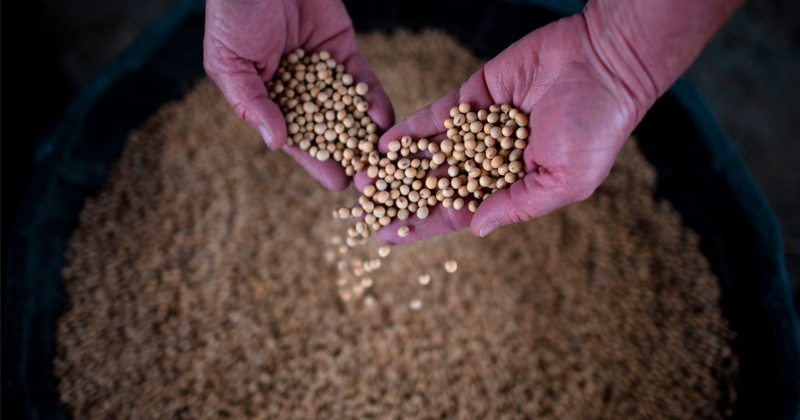 For months, China has been telling the US that it will waive tariffs on certain agriculture products such as pork which it so very desperately needs:

"China, U.S. should seek the right path to resolve their differences through more positive exchanges" – Xinhua

Like China lowering tariffs on pig imports which it so desperately needs to avoid a middle class uprising due to soaring pork prices?


China to exempt US pork and soybeans from additional trade war duties, in response to Trump’s tariff delay.

China desperately needs both to avoid a food crisis


In early Sept., China said it would waive soybean tariffs and start buying. Then in late Oct., China repeated it. Now a new headline from China states that it has waived duties of soybeans and pork, but does that mean China is actually going to start buying, or is it a feel-good narrative for President Trump to pump on Twitter?

To be sure the latest USDA data shows soybean exports to China are underwhelming. Meanwhile, China has made President Trump look foolish in the last four months with no trade deal.

The deal I just made with China is, by far, the greatest and biggest deal ever made for our Great Patriot Farmers in the history of our Country. In fact, there is a question as to whether or not this much product can be produced? Our farmers will figure it out. Thank you China!


Even CNBC this week called him out on the phony trade deal. He told farmers in several tweets that they better start buying bigger tractor because China is making substantial agriculture purchases.

Given Trump’s new comment that he may want to wait until after ‘20 for a China trade deal, here’s an exchange I had with Kellyanne Conway at the WH yesterday. I asked her if the president was wrong to announce the trade deal in October, before it was actually done. pic.twitter.com/29P7556akj


Meanwhile, as Trump has succeeded in squeezing shorts by announcing a “trade deal is almost here” every day for the past year, even though one clearly isn’t, China has been busy sourcing soybeans and meat from other places such as Argentina and Brazil. As we have reported, China signed trade deals with both of these countries in the last four months. In one instance, China announced that they would open a ‘grains superhighway‘ in Argentina to source soybeans.

So it should now make sense why Trump wants to unleash a tariff war on Argentina and Brazil, mostly because China sourced their latest agriculture products from both of those countries and abandoned US farmers.

Why would China want to buy and entirely rely on the US for agriculture products? It doesn’t make sense if you think about it like this – in the view of the Chinese: Trump can wake up any day, and for whatever reason, halt bulk carrier shipments of products en route to the East, as he could say it’s a “national security threat.”

Since we’ve heard the waiver story before, here’s China’s Tariff Commission of the State Council announcing Friday morning waivers “to exclude some soybeans, pork, and other goods purchased from the United States.”

“According to domestic needs, Chinese enterprises independently import certain quantities of goods from the United States through market-based procurement. The Customs Tariff Commission of the State Council is carrying out the exclusion of some soybeans, pork and other commodities based on the application of relevant enterprises. For the products within the exclusion range, the exclusion measures such as the 301 measures against the United States against tariffs are adopted. For the procurement of goods within the exclusion range, the enterprise shall negotiate independently, import on its own, and bear its own profits and losses.”

And here’s the truth, as of Friday morning (5:15 am est.), the world’s bulk carriers hauling grains, meals, feeds, and softs, are primarily flowing from Argentina and Brazil to Europe and South East Asia, with basically no ships flowing from the US to China.

So the question everyone is asking: Is China actually going to buy $40 billion to $50 billion in US farm products per year?

The answer is no. It was an overstated number by Trump to pump stocks. There was even a report on Thur. detailing how there’s disagreement on the size of agriculture purchases. On Friday morning, CNBC’s Eunice Yoon said that “Beijing’s bottom lines in the #trade talks- that purchases need to be based on market needs. Beijing still wants to message that it is holding the line.”

Yes, @JoeSquawk! #China is offering an olive branch to the Trump administration. However, officials also repeated one of Beijing’s bottom lines in the #trade talks- that purchases need to be based on market needs. Beijing still wants to message that it is holding the line. https://t.co/60JokEP9b9


Of course, the market doesn’t care whether there is a deal or not, it’s a dip-buying opportunity (sending stocks higher and Treasury prices lower overnight), which is precisely what Trump wanted all along.