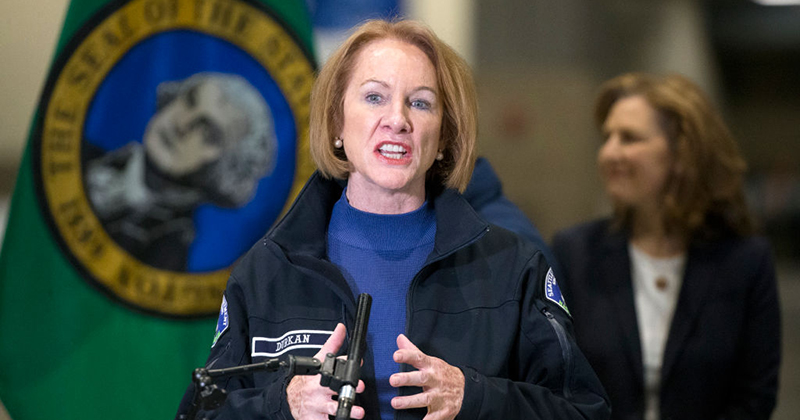 Seattle Mayor Jenny Durkan sent heavy machinery to remove concrete barricades around the CHOP ‘autonomous zone’ and called for a probe of a council member, after protesters showed up outside her residence.

Under the cover of rain on Tuesday, vehicles operated by city workers removed the barricades set up around the Capitol Hill Occupied Protest (CHOP, formerly known as CHAZ), an area spanning several blocks of downtown Seattle under control of protesters – including Black Lives Matter, Antifa and anarchists – since early June.

Unlike Friday’s attempt to dismantle the barricades, which ended with city workers retreating after a two-hour standoff, there were no protesters physically blocking the machinery this time. Instead, they moved furniture, bins and other objects into the street afterward, according to KIRO-TV reporter Deedee Sun.

CHOP protesters objected to the removal because “barricades save lives,” Sun reported, noting that they objected to their original deployment by the city two weeks prior. Critics of CHOP had also been opposed, saying the city was basically aiding and abetting the rioters.

Mayor Durkan had initially approved of the “autonomous zone” centered around the abandoned East Precinct police station, calling it a “summer of love” and proof of Seattle’s “democracy.” Then two African-American men were killed, and two more critically injured, in a series of shootings a week apart.

The proverbial last straw, however, seems to have been the appearance of protesters outside of Durkan’s residence. Noting that her address has been kept confidential since she was a US attorney in Seattle during the Obama administration, Durkan accused the protesters of putting “families and children at risk.”

The stunt led the mayor to denounce Councilmember Kshama Sawant, a socialist who has joined forces with the protesters. Durkan has now asked the council to investigate Sawant over allowing protesters into City Hall earlier this month, encouraging the occupation of the East Precinct to begin with, and finally leading the protesters to Durkan’s residence.

Sawant responded by admitting that she “marched, rallied, and organized” with the local community – including her office staff – in the name of racial, environmental and economic justice, accusing Durkan of having “utterly failed working people and communities of color in this city.”

She further accused the mayor of being a “corporate politician desperately looking to distract from her failures of leadership and politically bankrupt administration,” having once been a progressive ally. Sawant echoed the demands of the protesters to reverse “racist gentrification,” de-fund the city police, and fund the Green New Deal instead.

CHOP/CHAZ was initially described as a peaceful protest against police brutality over the death of George Floyd in Minnesota. It has resulted in two homicides in under a month so far; that’s how many were recorded in the entire Capitol Hill neighborhood in all of 2019.