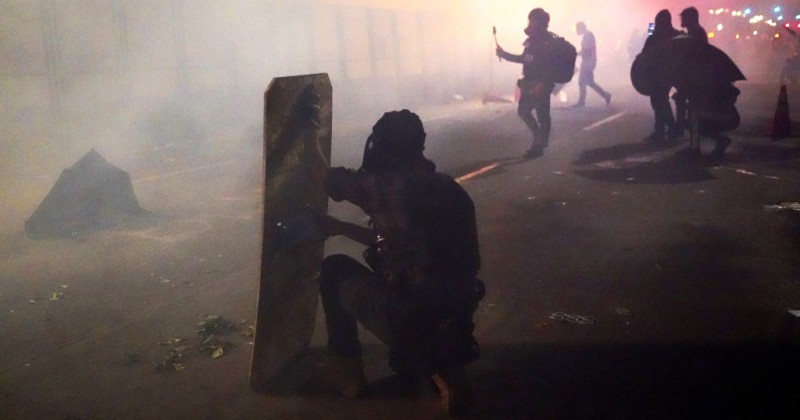 NPR published an article claiming that calling a riot a “riot” is offensive because it’s “rooted in racism.”

The article was written by Jonathan Levinson for Oregon Public Broadcasting, the Portland NPR affiliate.

Portland has experienced 93 days of continuous rioting – last night was the first time in that entire period that the city has not seen unrest – but according to Levinson, merely calling a spade a spade is a racist dog whistle.

Levinson’s argument for this position is vague to the point of being non-existent. He appears upset that police are able to declare a riot and use crowd control measures to disperse violent BLM mobs.

Calling a riot a riot could be rooted in racism, says reporter Jonathan Levinson for Oregon Public Broadcasting, the Portland NPR affiliate. pic.twitter.com/b2srvbEgM7

His only point appears to be that because crowd control measures were also used in the 60s during the civil rights era, this means that using them today is racist, despite the fact that the clear majority of BLM protesters in Portland are white.

The media now seems to be taking three different approaches to the riots.

Claim that they are largely “peaceful,” as both CNN and CBS News did this week.

Claim that the riots aren’t even happening at all or are minimal, as CNN political analyst Kirsten Powers did.

Or as NPR has done, simply declare that anyone who dares use the words “riot” to describe the mayhem that has plagued American cities for the past 3 months is a despicable racist.

Unfortunately for Democrats, the polls suggest that all three of these methods aren’t working because the unrest is turning voters away from Joe Biden in droves.