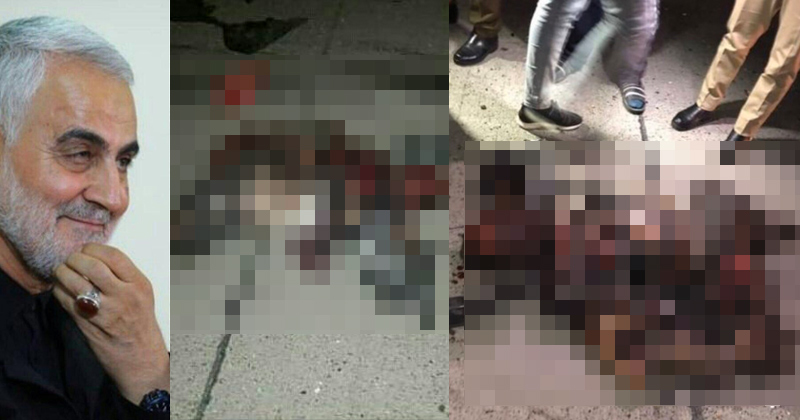 Grisly photos circulated on social media purport to show the body of Iranian commander Qassem Soleimani, who was reportedly killed during a US air strike on a Baghdad airport early Friday morning.

“Last night, at my direction, the United States military successfully executed a flawless precision strike that killed the number one terrorist anywhere in the world, Qassem Soleimani,” Trump stated. “Soleimani was plotting imminent and sinister attacks on American diplomats and military personnel, but we caught him in the act and terminated him.”

Today I came back from a trip and heard about Soleimani’s death. For the first time, I opened my four-year-old wine as it was the best news I heard these days.

You killed, gathered wealth, got drawn in power, people served you, but this is what is left from you.

The water of death, would eventually pass your lips too.

This is what’s going to happen to the rest of the commanders of the IRGC and related people to them. #QassemSoleimani (above translation)

Another photo appeared to show Soleimani’s bloodied hand wearing a ring, which was reportedly used to help identify the body as that of the Iranian top commander and a crucial component to verifying his death, as he’d been falsely reported dead previously.

Dear @realDonaldTrump
You did a great job & it will take years for people to understand how much you love America & the world patriots.
This is certainly the right way to fight terrorists.
The people of Iran appreciate you for killing #QassemSoleimani.pic.twitter.com/tRMrCf6NN3

Cheers to President Trump, the Restart Opposition President in America. #Soleimani (above translation)

“And I had never been happy of someone’s demise,” (above translation) one Iranian citizen said in response to a tweet by another Iranian saying he had never been this sad.

Congratulations to all Restartee friends and all the people who are seeking freedom and all those in the fight between light and the darkness.
Another devil has joined the trashcan of history (above translation )

What @SpeakerPelosi's tweet actually implies:
The IR regime should know that we are not the ones to blame; the action was taken by @POTUS & done without our permission, otherwise, we would've let #QassemSoleimani know to save his life.#Obama paid $150B for the exact same reason! https://t.co/z5UbtwcVXb

After the chain killer, #QassemSoleimani, has been sent to hell, many of the trolls run by the IR regime and globalists who were busy deceiving people, are showing their real faces.
The worms are coming out of the ground. (above translation)

President Trump :
My dear Restartees, how did I do today?
(above translation)