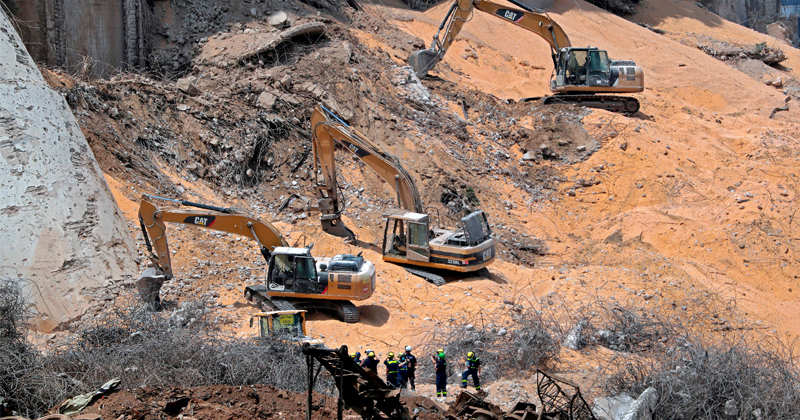 Lebanese and international investigators have yet to identify the owner of the 2,750 tons of ammonium nitrate which sat languishing in Beirut’s port for seven years before it detonated amid an accidental warehouse fire on Aug.4, killing over 200 people and injuring more than 6,000.

It was estimated to be worth $700,000 by 2013 prices, but no one ever came forward to claim it. It’s still a mystery even after Cypriot authorities at the request of Interpol late last week finally interviewed the man who originally abandoned Rhosus, a Russian businessman named Igor Grechushkin, during the ship’s ill-fated intended trip to deliver the substance to an explosives maker in Mozambique.

Reuters along with others have been investigating the ship, which sank while moored of Beirut in 2018, and the mystery of just who owned its volatile cargo: “Among the still-unanswered questions: who paid for the ammonium nitrate and did they ever seek to reclaim the cargo when the Rhosus was impounded? And if not, why not?”

Under international maritime conventions and some domestic laws, commercial vessels must have insurance to cover events such as environmental damage, loss of life or injury caused by a sinking, spill or collision. Yet the Rhosus was uninsured, according to two sources familiar with the matter.

Along with no insurance and no individual or company willing to claim ownership, there’s a sketchy paper trail, suggesting either years of cover-up or shielding responsibility.

“But Reuters interviews and trawls for documents across 10 countries in search of the original ownership of this 2,750-tonne consignment instead revealed an intricate tale of missing documentation, secrecy and a web of small, obscure companies that span the globe,” the report says.

It continues: “Those linked to the shipment and interviewed by Reuters all denied knowledge of the cargo’s original owner or declined to answer the question. Those who said they didn’t know included the ship’s captain, the Georgian fertilizer maker who produced the cargo and the African firm that ordered it but said it never paid for it.”

The Georgian fertilizer company which produced the ammonium nitrate was dissolved in 2016, while the ‘middle man’ trading company through which it was ordered – Savaro Ltd, declined to answer any questions.

Only this could be learned, however: “A source familiar with the inner workings of Savaro’s trading business said it sold fertilizer from ex-Soviet Union states to clients in Africa,” according to Reuters.

As the report describes, ironically enough, chain of ownership regarding any particular shipped cargo should be the easiest aspect of a transfer to establish, but in this case remains the most indecipherable and contested element.