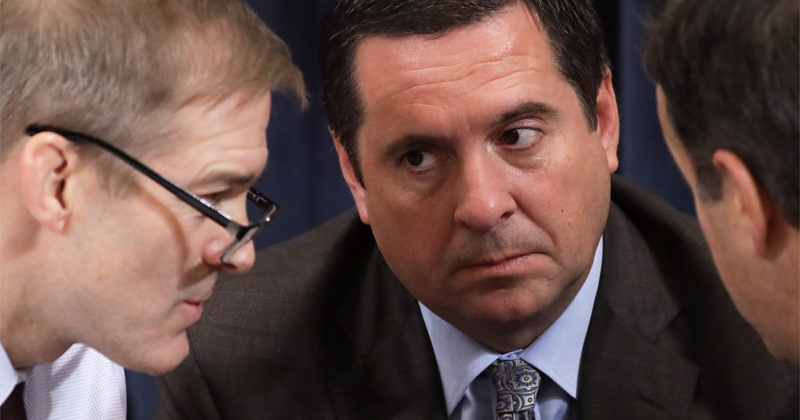 After the president’s interview, Rep. Devin Nunes, the top Republican on the House Intelligence Committee, appeared on Bartiromo’s show. She asked Nunes about Trump’s comments about the spying on his campaign, and whether he agreed with Trump’s statement that it went all the way up to Obama and Biden.

“It’s way worse than even we thought it was,” Nunes told her. “And we knew it was really, really bad.”

Nunes then pointed out that, based on declassified notes, we know that it was Biden who suggested going after Flynn, based on the Logan Act.

“So, clearly, the previous administration knew that they were spying on the Trump campaign. Joe Biden should have known at the time to put a halt to this. So he is just as guilty as everybody else.”

Nunes explained that by “guilty” he didn’t mean that Biden specifically broke any laws, but “he knew damn well that something was occurring, using our intelligence apparatus in this country … to target people that his party had just got their clocks cleaned by in 2016.”

In May, declassified Department of Justice (DOJ) documents showed that President Obama was aware of the details of wiretapped conversations of then-incoming National Security Adviser Michael Flynn with then-Russian Ambassador Sergey Kislyak back in December 2016. Joe Biden was also aware, and was present at a meeting discussing it.

“On January 5, 2017, Yates attended an Oval Office meeting with then-FBI Director James Comey, then-Vice President Joe Biden, then-CIA Director John Brennan, and then-Director of National Intelligence James Clapper, according to the newly declassified documents, including an FD-302 FBI witness report,” reported Fox News’ Gregg Re at the time. “They were discussing Russian election interference, along with national security adviser Susan Rice and other members of the national security council.”

The entire investigation of Trump and his associates was based on Russian disinformation, and the FBI “used Russia’s meddling with the 2016 election as a pretext to investigate Donald Trump” and those around him.

According to handwritten notes from Peter Strzok, it was Biden who suggested using the Logan Act to target Michael Flynn.

These notes contradicted an email that former Obama national security adviser Susan Rice sent to herself about the meeting saying Obama wanted everything done “by the book.” Former Acting Director of National Intelligence Richard Grenell noted, “The Susan Rice email to herself clearly didn’t give an accurate portrayal of the meeting. The ‘right people’ is fundamentally different than ‘by the book.’”

This is very troubling. The Susan Rice email to herself clearly didn’t give an accurate portrayal of the meeting.
The “right people” is fundamentally different than “by the book”. https://t.co/AYs3oZ7qaX


The Justice Department dropped its case against Flynn on May 7, in the wake of internal memos revealing the intent to entrap Flynn on perjury charges in order to “get him fired” as national security adviser to President Trump. Testimony transcripts declassified the same day showed that the Obama administration never had any empirical evidence of Russian collusion.

“I never saw any direct empirical evidence that the Trump campaign or someone in it was plotting/conspiring with the Russians to meddle with the election,” testified former Director of National Intelligence James Clapper in 2017. “That’s not to say that there weren’t concerns about the evidence we were seeing, anecdotal evidence. … But I do not recall any instance where I had direct evidence.”

“To the best of my recollection, there wasn’t anything smoking, but there were some things that gave me pause,” said Obama national security adviser Susan Rice with regard to conspiracy. “I don’t recall intelligence that I would consider evidence to that effect that I saw…conspiracy prior to my departure.”

When asked if she ever saw evidence of coordination, she answered, “I don’t recall any intelligence or evidence to that effect.” She gave the same answer when asked about collusion.

Obama’s former deputy national security adviser, Ben Rhodes, also had nothing. “I wouldn’t have received any information on any criminal or counterintelligence investigations into what the Trump campaign was doing, so I would not have seen that information,” he said. “I saw indications of potential coordination, but I did not see, you know, the specific evidence of the actions of the Trump campaign.”

Former Attorney General Loretta Lynch said she did “not recall that being briefed up to me.”

When asked about the accuracy and legitimacy of the Steele dossier, former FBI Deputy Director Andrew McCabe admitted they were never able to prove its legitimacy. When asked what was the most “damning or important piece of evidence in the dossier that” he “now knows is true,” McCabe replied, “We have not been able to prove the accuracy of all the information.”


The spider at the center of the NWO web wants one thing. Total power and control.