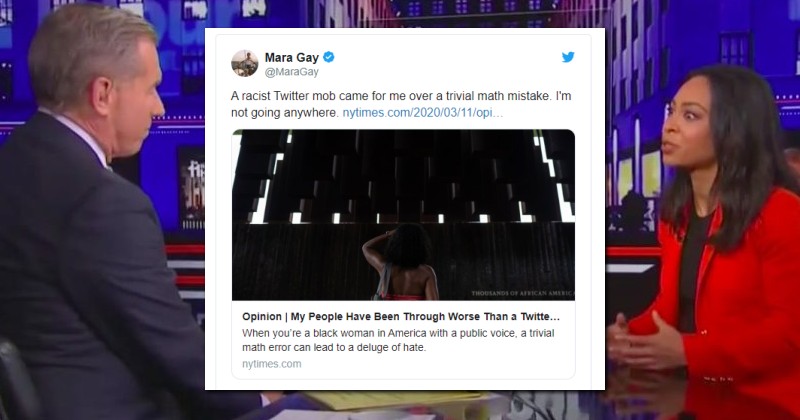 The New York Times journalist who was humiliated for erroneously claiming Mike Bloomberg’s $500 million ad buy could have been used to give every American $1 million dollars has re-emerged to complain that her embarrassment was the fault of a “racist Twitter mob.”

Mara Gay responded to Bloomberg dropping out of the presidential race last week by claiming that the money he spent on campaign commercials could have made every American a millionaire with lots of spare change.

“Actually with the money he spent he could have given every American a million dollars,” Gay told MSNBC’s Brian Williams, who immediately agreed.

With math obviously not being Gay’s strong point, it was immediately pointed out that Bloomberg’s $500 billion doled out to all 327 million Americans would mean they get just $1.53 each.

“A racist Twitter mob came for me over a trivial math mistake. I’m not going anywhere,” she tweeted.

A racist Twitter mob came for me over a trivial math mistake. I'm not going anywhere. https://t.co/McxAT8P7OI

In the article, Gay complains about receiving a “deluge of hate.”

“Unfortunately, quite a few Americans can tell you what it’s like to be the target of a Twitter mob over a gaffe,” she writes. “My great sin was trivial, harmless, silly. What’s it like when people are trying to cancel you for a math mistake? Weird, and maddening and painful.”

“But she’s not unique for getting tweets making fun of her,” responds Barrett Wilson. “Every public figure gets that. People who put themselves out there, on tv, in writing, on radio, on twitter, get hate from trolls who want attention and don’t have enough nerve, drive, or talent to express themselves in a constructive way.

Indeed, everyone who finds themselves in the crosshairs of a media spectacle, whether they be black, white, conservative or liberal, can expect to receive a deluge of hateful messages on social media.

The only difference is that people on the left always react to being embarrassed by crying “bullying and harassment,” and the media promptly rushes to their defense. Conservatives don’t enjoy that privilege.

Mara; No matter how many mean messages from racists you receive on Twitter, your math is still terrible.

“If you’re going to go on TV and talk to millions of people about economics, learn to do some super basic math in your head. And if you screw up, and people notice, it’s because it’s obvious, not because they’re racist,” writes Wilson.

I’m not sure this is gonna get you on the medal stand in the Oppression Olympics, but I applaud your effort. You’re basically Rosa Parks.

Correction: People who can do basic math mocked you. Then, as usual, you blamed "racism" like all liberals do.

The face of Racism. pic.twitter.com/RZq9VnS5tG

The reaction would've been the same if you were a white male had you made an egregious math error. If fact, Brian Williams was for the exact same mistake.