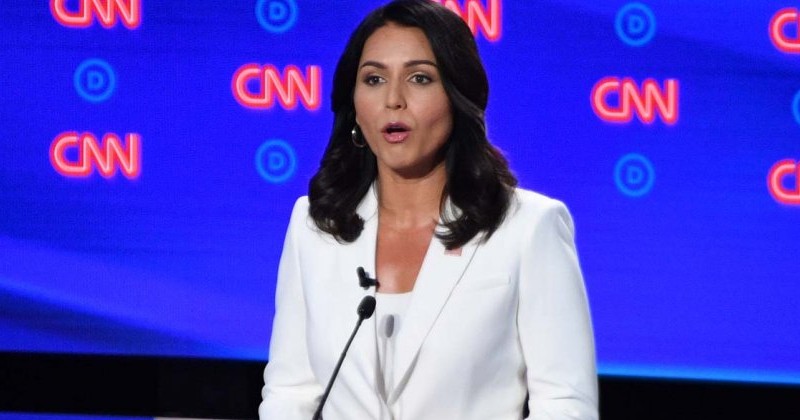 Style writer Vanessa Friedman had drooled over Hillary’s clothing back in 2016, calling her white pantsuit “presidential.”

However, when Gabbard, a fierce critic of Clinton, wore virtually the exact same outfit, Friedman said it made her look like a “cult leader” full of “combative righteousness” and that the white fabric has “connotations of the fringe, rather than the center” and even undermines “community building.”

Journalist Glenn Greenwald highlighted the fact that it’s normally considered sexist to judge women on their clothing, but that an exception had been made for Gabbard.

Yes, usually it’s misogynistic to attack a female politician for the clothes she wears but an exception will be made (for obvious reasons) in this case.

I’m just grateful the NYT didn’t claim white pants suits were Russian. I was waiting for a Kremlin or Putin link. https://t.co/GAO5e2cbvS

Another Twitter user pointed out that Friedman had also previously praised Democratic Congresswomen at Trump’s State of the Union for wearing white but lambasted Melania Trump for wearing the same color.

All four of these are from @VVFriedman. Imagine choosing something as patently stupid as white pantsuits to expose your rank hypocrisy and blind hatred over. pic.twitter.com/Zj94LQhDIp

“Imagine choosing something as patently stupid as white pantsuits to expose your rank hypocrisy and blind hatred over,” remarked the Twitter user.

“Only neoliberals and war hawks can wear white suites apparently,” added another.

Apparently, wearing white is a brave expression of purity and leadership, unless you challenge the Democratic establishment or the deep state, at which point it suddenly makes you a “cult leader.”

And people wonder why mainstream journalism is dying.