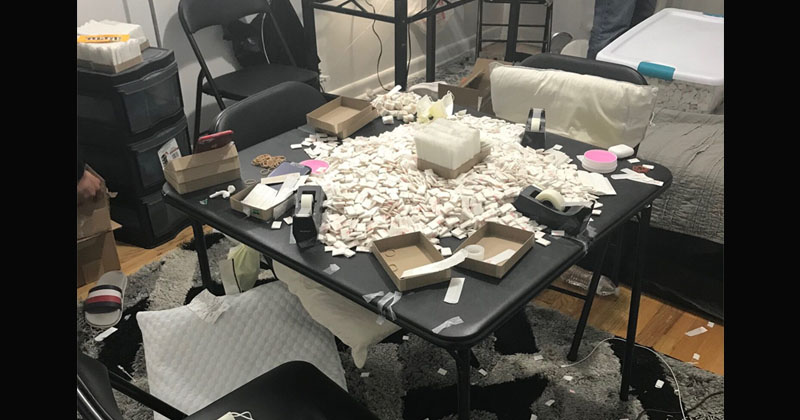 Image Credits: screenshot/Office of Special Narcotics Prosecutor for the City of New York.

Six suspected drug dealers accused of running a $7 million fentanyl operation out of a New York City apartment were released without bail Wednesday under the Democrats’ new criminal justice law.

“When agents and officers entered the apartment at approximately 7:25 p.m., they discovered six individuals in the midst of packaging powder-filled glassine envelopes stamped with the brand ‘Fire’ into bundles,” the NYC Office of the Special Narcotics Prosecutor stated in a press release.

“Hundreds of thousands of glassine envelopes covered two table tops and overflowed from plastic bins and cardboard boxes on the floor and a bed. Equipment and paraphernalia typical of a heroin/fentanyl mill were present in the room, including a glass table, desk lamps, a scale, grinders, empty glassine envelopes, small spoons, an ink bottle, ink pads and stamps.”

The suspects were charged with criminal possession of a controlled substance and using drug paraphernalia.

A number of brainwashed supporters even “waved their hands in celebration as the 6 walked out,” according to the New York Post.

“The sheer volume of heroin and fentanyl packages assembled in a small apartment just off the Major Deegan Expressway in the Bronx is shocking. Even veteran narcotics investigators were surprised by the output of this packaging operation, which was run out of a nondescript apartment in the borough afflicted by the city’s highest rate of overdose death,” Brennan said.

“The arrests of six individuals, and seizure of 750,000 drug filled envelopes destined for distribution here and in New England, underscore New York City’s role as a hub for mass distribution of deadly drugs.”

The outrageous release of these suspects is another example of the failed bail reform law backed by New York Democrat leadership, including Gov. Andrew Cuomo and New York City Mayor Bill de Blasio, which has already received extensive backlash by law enforcement since the law went into effect at the beginning of 2020.

Broome County Sheriff David Harder said the new law emboldens criminals, citing one instance where a serial bank robber robbed yet another bank after having just been released from custody without bail.

“The officers are out there trying to make the community safe, charging people with crimes they are committing, only to turn them loose and make the same crime again,” Harder said.

“A great example, look at New York City. Everybody knows about that. The one gentleman held up 6 different banks. Why? Because he’s going to be turned loose every time.”

“I can’t believe they let me out,” Woodberry reportedly said. “What were they thinking?”

President Trump routinely reminds voters that Democrats are now the party of high crime – among other terrible things.

Democrats are now the party of high taxes, high crime, open borders, late-term abortion, socialism, and blatant corruption. The Republican Party is the party of the American Worker, the American Family, and the American Dream! #TrumpRallyNJ #KAG2020 pic.twitter.com/Kq5KFhQmgH

Alex Jones takes calls from military and law enforcement to get their view on the orders to confiscate firearms from citizens in direct violation of the second amendment.