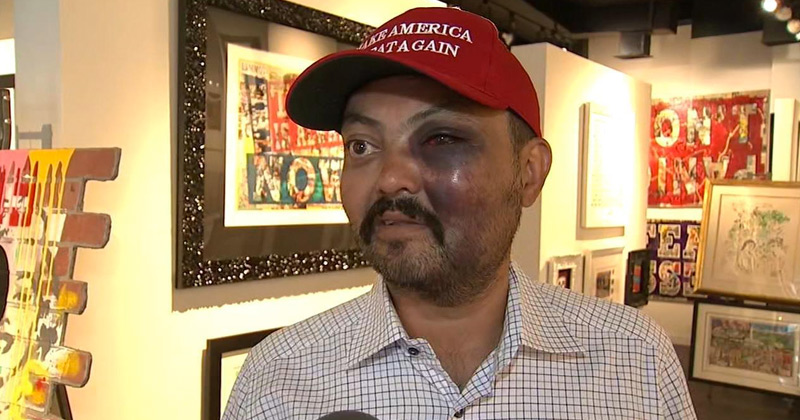 A New York business owner says he was assaulted due to his baseball cap — a red “Make America Great Again” hat.

According to Jahangir “John” Turan, the owner of an art gallery in the famed Billionaire’s Row district, he had just purchased the hat earlier that day at Trump Tower when a group of young people, aged 18-20, stopped him on Canal Street on the way to a meeting.

Turan says one woman flipped the hat off his head, and that as soon as he bent to pick it up, he was assailed by the group, which knocked his head against a pole and gave him a quick beating.

“I was walking on Canal, it was some sort of event. And, I got jumped for wearing this hat,” he said in an interview, sporting a swollen eye. “They started cursing at me, You know, they said, ‘Trump hat, blah blah blah,’ and basically one kid took my head and bashed it against the scaffolding poll. It all happened within 10 seconds. I jumped out, crossed the street, and called the cops. That’s my situation right now.

All the while, they were saying “Fuck Trump,” and other derogatory remarks referencing the US president.

“It’s sad to get beat up for wearing this hat. This is America,” Turan said, according to Fox5NY.com.

The man says the group continued to yell anti-Trump statements after police arrived, however a police report of the incident made no mention of those statements, according to NBCNewYork.com.

Turan says he suffered a cheek fracture and plans on visiting an eye specialist, but says the eye’s vision is still intact.