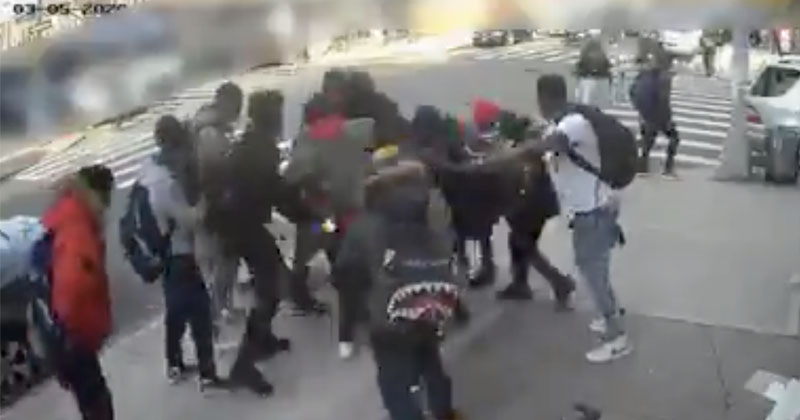 Video out of Brooklyn shows what NYPD assistant chief Jeffrey Maddrey called a “group of school children” viciously attacking a 15-year-old girl in the street.

OUTRAGE:this is sickening video of a 15 year old girl viciously attacked by a group of school children. One young man takes the sneakers right off the unconscious victim’s feet. The teenager is in the hospital recovering. We CAN NOT allow this behavior in our community. #Speakup pic.twitter.com/VLLb91fDOM

Police are searching for a group of suspects accused in a violent gang assault and robbery of a 15-year-old girl in Brooklyn.

Investigators believe this was a retaliation attack for another incident that took place earlier.

The brutal assault was caught on camera shortly after 4 p.m. Thursday on Utica Avenue near Sterling Place in Crown Heights.

[…] “She was bleeding like crazy,” Peavy said. “We just tried to keep her calm and sitting there until the ambulance come.”

According to the priorities of the NYPD, the greatest threat to the public are “far right” groups like the Proud Boys and special new police units need to be formed to hunt them down.

NYT implies Jersey City work of white radicals
“The two suspects, a man and a woman, were killed in a shootout with police. The man, who has been identified as David N. Anderson, 47, had a history of posting anti-Semitic and anti-police rhetoric online…”https://t.co/czJQfKtk5W

Newly released statistics show a big jump in crime last month compared to a year ago.

The only positive statistic related to murders, which were down 20%. Only 20 people were killed in New York City in February according to the NYPD.

Thirty-five percent, or 299, were for arrests in the seven major crime categories – murder, rape, robbery, felony assault, burglary, grand larceny, and grand larceny auto – that is nearly triple the amount of those crimes committed in the same 58 days in 2019.

While “school children” like those above are shown the greatest leniency, “far right” groups like the Proud Boys are aggressively prosecuted for their political beliefs.

Gov. Cuomo called the Proud Boys “neo-fascists” and said “I have a message for the ‘Bigot Boys’ who skulk around like cowards in the dead of night…Crawl back into your hole, Bigot Boys — there’s no place for hate in our state.” https://t.co/RR8Tpzeaw1


As long as these “school children” didn’t call their victim an “illegal alien” odds are they have little to worry about!

New York City has banned the term “illegal alien” when used “with intent to demean, humiliate or harass a person,” the city said. A violation can result in a fine up to $250,000. https://t.co/UrANA7B4HK

Joel Patrick joins Owen to discuss the recent mob riot attack against him and Kaitlin Bennett at one of the most “liberal” colleges in America.