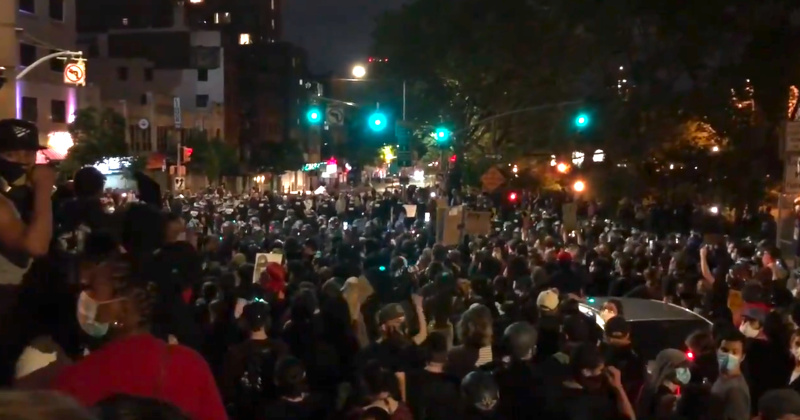 Hundreds of protesters have found themselves corralled on the Manhattan bridge after police refused to let them leave from either side, prompting some to demand the New York mayor’s immediate resignation.

A sea of people filled the bridge connecting Brooklyn to Manhattan on Tuesday evening, long after the 8pm curfew imposed by Mayor Bill de Blasio came into effect. Peaceful protests against police brutality in the city have been tainted by widespread looting and unruly rioters, prompting a massive police presence.

It’s unclear why the NYPD decided to cordon off the bridge in the first place, with videos shared online showing protesters chanting: “I don’t see no riot here, why are you wearing riot gear?”

NYPD officers are blocking hundreds of protesters on the Manhattan Bridge from entering into Manhattan from Brooklyn. Crowd chanting “I don’t see no riot here, why are you wearing riot gear” pic.twitter.com/dpiBwBYfUa


Chants of “de Blasio, resign” could also be heard in the crowd. Meanwhile, witnesses report that police have sent in paddy wagons as if poised to round up curfew violators in a mass arrest.


halfway across the bridge and the paddy wagons are trying to stop us #OFFTHEBRIDGE pic.twitter.com/vFwcAMLXAy


As the standoff continued for more than an hour, de Blasio added fuel to the fire by taking to Twitter to praise his decision to introduce the curfew, seemingly oblivious to the tense situation on the bridge.

“At Barclays Center now. Very calm situation. So far, the curfew is certainly helping, based on everything I’ve seen in Brooklyn and Manhattan over the last three hours,” he said in a tweet, igniting ire from netizens.


Many pointed to the “thousands” of New Yorkers still trapped on the bridge, mirroring the protesters’ calls for the mayor’s resignation.