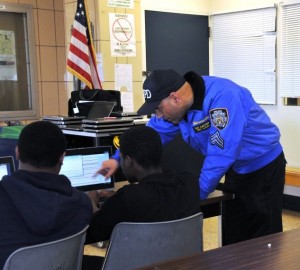 AP investigative journalists Matt Apuzzo and Adam Goldman memorably proclaimed the NYPD to be “less transparent than CIA, FBI and NSA” when it came to responding to FOI requests. Apparently, the NYPD finds this assessment of its obfuscation skills to be underwhelming, as other notable entities like “the Kremlin in its Cold War prime” and “the North Korean Ministry of People’s Security 1948-present” were not included in the journalists’ depiction of the department.

DNAinfo reports that the NYPD is now shutting down local journalist’s access to police blotters.

The NYPD has ordered the city’s 77 police precincts to stop giving out any information to the media about crimes taking place in their neighborhoods, cutting off a long-standing source of information for New Yorkers.

According to a terse NYPD edict transmitted citywide, precinct commanders were instructed: “Any requests by media to view complaint reports be referred to the office of the Deputy Commissioner For Public Information.”

This was first reported by Amanda Woods at The Nabe, who discovered this while attempting to do the site’s weekly rundown of the 88th Precinct’s police blotter.

Every Wednesday morning, a reporter from The Nabe visits the 88th Precinct and is handed forms outlining the previous week’s felony crime reports, which includes information on all murder, rape, assault, robbery, burglary or theft or property in the precinct. The reporter copies down the information, asks the officers lingering questions from the reports and writes up the crime blotter post. This will no longer be allowed. Reporters must now contact the Deputy Commissioner of Public Information (DCPI) for all crime inquiries, according to the officer.

Funneling everything through the DCPI creates an info bottleneck, as is surely the intention of this new policy. A source inside the police department said the DCPI is a “small unit” and would most likely be unable to cope with the influx of information requests.

Not only that, but the DCPI has already been pushed by Chief Ray Kelly to clamp down on the amount of information it releases to the public.

Under his stewardship, DCPI has systematically diminished the type of information it provides as well as overall access to department personnel. The clampdown evolved even though Mayor Michael Bloomberg, a media mogul, pledged that his administration would be a beacon of open government and transparency.

This leaves journalists with two options: queueing up for whatever scraps the DPCI might throw in its direction or filing FOIL requests. The latter is even less likely to result in any response, much less a timely one. The NYPD’s antagonistic attitude toward public information requests is well-documented. As Salon noted earlier this year, the NYPD stalls or denies a majority of requests, only begrudgingly parting with information when civil liberties groups (like the New York Civil Liberties Union) get involved.

So, unless journalists have an infinite amount of time and the willingness to go to court to battle for information they’re rightfully entitled to have, the NYPD will simply be able to play a waiting game, hoping those looking for info simply give up once the info requested loses its timeliness.