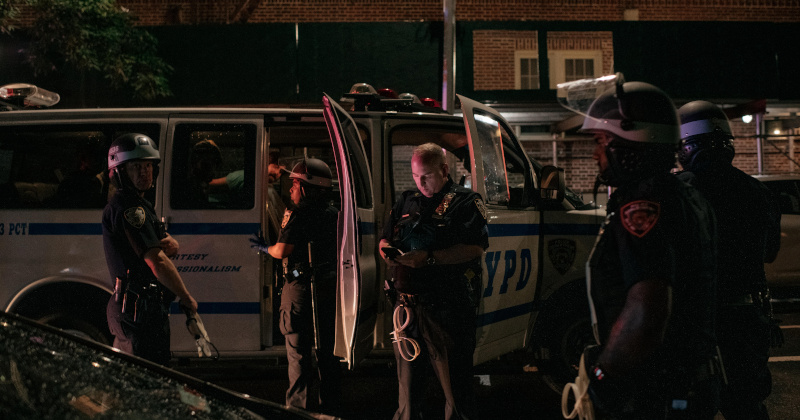 Two NYPD officers were shot and a third was stabbed during a violent altercation in Brooklyn late Wednesday night amid rage against police across the US.

It’s not clear whether this case is directly related to the protests.

The confrontation with a suspect began after the city’s curfew when he reportedly approached an NYPD police officer and stabbed him in the neck.

Multiple police officers responded to the scene, one of whom drew their pistol, which the suspect then reportedly attempted to take from the cop’s hands. In the ensuing struggle, the firearm went off twice, striking one officer in the hand and another in the arm.

An NYPD sergeant responding to the initial report of violence arrived on the scene and opened fire, critically injuring the suspect. The injured officers were rushed to Kings County Hospital for treatment for their non-life-threatening injuries.

More cops arriving along with DCPI and whatever this is. pic.twitter.com/ekOjAqABzE

Eyewitness footage from the scene showed a huge police response, including a helicopter and armored vehicles, to the incident during an already extremely tense time.

Helicopters circling over Crown Heights for the last hour. pic.twitter.com/KgbGMDwPMs

One video purports to show a destroyed NYPD vehicle following a car crash, though it is unclear whether this is related to the shooting incident.

The suspect was arrested at the scene and was listed as being in critical condition.

“It appears to be a complete cowardly, despicable, unprovoked attack on a defenseless police officer,” NYPD Commissioner Dermot Shea said at a press conference following the shooting.

“And thank God we’re not planning a funeral right now.”

Local resident Jean Jones claims he heard “at least 16 [gunshots] if I was being conservative.”

“I saw them shooting and then two of those officers started hiding behind their vehicle, like they were trying to avoid being shot,” Jones said.

The shooting incident comes amid nationwide protests against police brutality following the untimely death of George Floyd while in police custody in Minneapolis.

All four of the arresting officers are facing criminal charges including a second degree murder charge for former officer Derek Chauvin who was filmed kneeling on Floyd’s neck for over eight minutes.