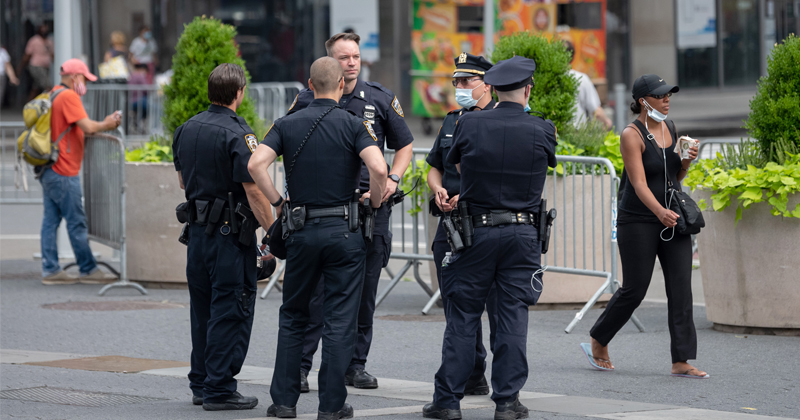 New York City police officers are feeling abandoned by their department and by city leaders and are showing their displeasure and hopelessness by filing for retirement.

In the last week alone, 179 NYPD officers have filed for retirement compared to 35 in 2019, the department told The Hill.

It’s gotten so bad that the department is now limiting the number of officers who can file for retirement. The pension office has been so overwhelmed that they are only accepting 40 applications a day.

One officer told the Post that they have had so many applications that the pension office has had to limit the number of appointments to around 40 a day.

“Apparently, the pension section is only taking a certain amount of people per day and I think they are backed up till late July, early August,” one officer said. “That’s why you don’t see like 100 a day, because they are only doing like 35 to 40 a day, by appointment.”

Well, Mr. Mayor, that’s one way to “defund the police.”

It appears that most of the officers retiring are among the most experienced on the force.

The increase in retirements is a loss to New Yorkers, according to Paul DiGiacomo, president of the Detectives’ Endowment Association.

“The increase in detectives and other cops filing for retirement comes as no shock,” DiGiacomo said. “No one wants to come to work every day and be demoralized and vilified as they risk their lives to protect people.”

“New Yorkers are losing their most experienced crime fighters because of continued violence in the city and the apathy of misguided elected officials,” DiGiacomo said.

Being vilified and abandoned by the public is one thing. But if the department and the city’s political leaders had their backs, most police officers would be able to cope with the public’s hate.

But in New York and elsewhere, radical politicians like Mayor de Blasio and spineless department leaders have left their officers hanging out to dry, too frightened of the mob to stand up for them, calculating the political cost of supporting them.

Adding to the cops’ woes is the “bail reform” that releases most suspects immediately after they’re caught.

“It is frustrating — you work on a case and then the suspect is let go,” the 25-year veteran said.

“Why put your job on the line, when no one appreciates you or has your back?”

The leader of the police union was even blunter.

In a prepared statement, the head of the Police Benevolent Association blamed lawmakers for having “completely dismantled our justice system” and called the rash of retirement applications “one answer to the question on every police officer’s mind: How are we supposed to do our job in this environment?”

“And now that crime is out of control, they want to blame us for that, too,” PBA president Pat Lynch said.

Eventually, the stupidity of the “defund the police” movement will be exposed and the backlash will once again favor the cop on the beat. With murders and other violent crime spiraling out of control in major cities, it’s only a matter of time before even black communities will be calling for more police.