Folks attending Super Bowl festivities in the Big Apple next month will likely encounter the automobile-equivalent of RoboCop – a souped-up cruiser being touted as the greatest asset in the NYPD’s counter-terrorism arsenal. 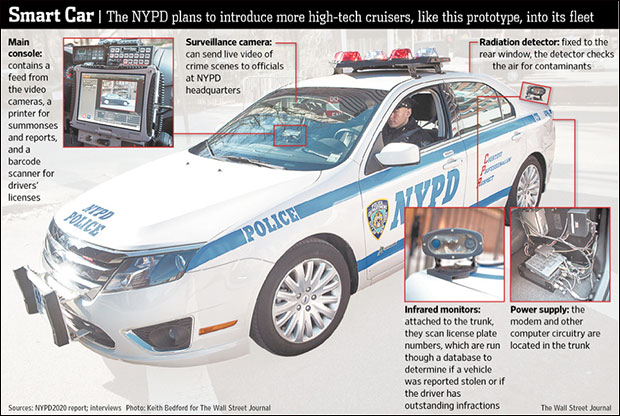 Infrared scanners, mounted on the trunk of the modified Ford Hybrid – an overt nod to the “green” movement – serve to scan every license plate number they come across, simultaneously cross-checking them against the NYPD database in alleged hopes to retrieve stolen cars, nab car thieves, apprehend warrant violators, or simply go after people with unpaid parking tickets.

Attached to the rear windshield, a radiation detector scans the air for increases in radiation levels and also transmits the data back to HQ.

Additionally, a surveillance camera with the capacity to “digitally record everything that passes in front of its windshield,” according to the Daily News, allows headquarters to access omnipresent live video feeds.

The department has been testing the car for the past year in the Brooklyn Heights and DUMBO (Down Under the Manhattan Bridge Overpass) neighborhoods as part of its NYPD2020 initiative, an all-out effort that “leverages the latest advances in technology, organization, and training to keep the city safe into the next decade.”

The police commissioner succeeding Ray Kelly, William Bratton, will decide whether or not to purchase a fleet of Smart patrol cars, according to the Wall Street Journal, but apparently figuring out a way to fit them into the department’s budget, and not the violation of millions of New Yorkers’ privacy, seems to be the only concern.

And this smart car’s features are just the tip of the iceberg. In the near future, Deputy Inspector Brandon del Pozo says, “smart cars might include fingerprint scanners and facial recognition sensors.”

However, naturally and thankfully, the Big Brother-on-wheels has encountered resistance in the form of privacy advocates.

In July, the ACLU released a report entitled, “You Are Being Tracked: How License Plate Readers Are Being Used To Record Americans’ Movements.” The organization claimed that, of the vast majority of license plate data collected, “only a fraction of 1 percent of reads are hits – and an even smaller fraction result in an arrest.” The ACLU also warned license plate readers could be abused, and can lead to “pervasive, permanent monitoring,” although their recommendations for curbing the activity are rather lacking and lenient.

Big Apple surveillance has come a long way in eliminating civil liberties since 9/11, but as long as police mention it’s being done in the name of combating “terrorism,” it appears there’s no extent to which people will surrender privacy.