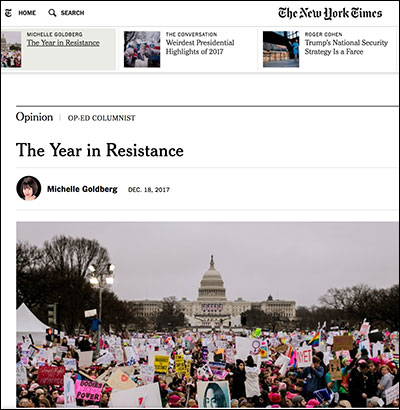 Michelle Goldberg, a leftist columnist for The New York Times, gleefully recounted a series of “victories” earned by the nationwide resistance to President Trump, beginning with the citizens “coordinated by groups like Indivisible, MoveOn and the Working Families Party” who “flooded congressional town halls to demand that their representatives save the Affordable Care Act.” 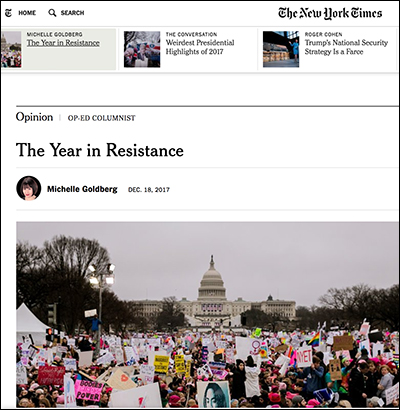 Despite repeated efforts by conservative Republicans in both houses of Congress, measures repealing Obamacare repeatedly failed in the Senate in the face of unanimous opposition by Democrats along with a handful of Republicans.

The closer than expected special election in Georgia’s 6th Congressional district to succeed Tom Price, who had resigned to become Secretary of Health and Human Services, was fueled by “the energy of the district’s previously apolitical suburban women” galvanized by their “disgust for Trump.”

Despite raising more than $23 million, Democrat Jon Ossoff was defeated by Republican Karen Handel in a loss deemed “demoralizing” by The New York Times, with Democrats “left to wonder if the intense anti-Trump passion visible in protests, marches, money and new volunteers isn’t just some theatrical, symbolic, abstract thing.”

According to Goldberg, the intense anti-Trump passion is not theatrical or abstract, as “Democrats have triumphed all over the country, as Trump’s approval rating keeps sinking.”

“Inasmuch as Trump is able to force his agenda on an unwilling nation, it’s because of a breakdown in democracy that renders many members of Congress heedless of their own constituents,” she declared.

Goldberg’s suggestion does not hold weight when matched against a breakdown of the 2016 election result by Congressional district. If each Congressional district was represented by a person from the same party as the presidential candidate who won the district, Republicans would hold a majority of seats with 230, while Democrats would still be in the minority with 205 seats.

Despite the efforts of leftist organizations, their allies in the mainstream media, and the deep state to stop Trump’s agenda, he has continued to make progress, much to their chagrin.

“But while Trump has given his followers the liberal tears they crave, that victory contains the seeds of its own reversal. Trump has done more to spur progressive political organizing than Bernie Sanders, George Soros and Saul Alinsky combined,” Goldberg concluded. “The president once warned that if he fell, he’d take the entire Republican Party down with him. Thanks to the Resistance, he might still have the chance.”