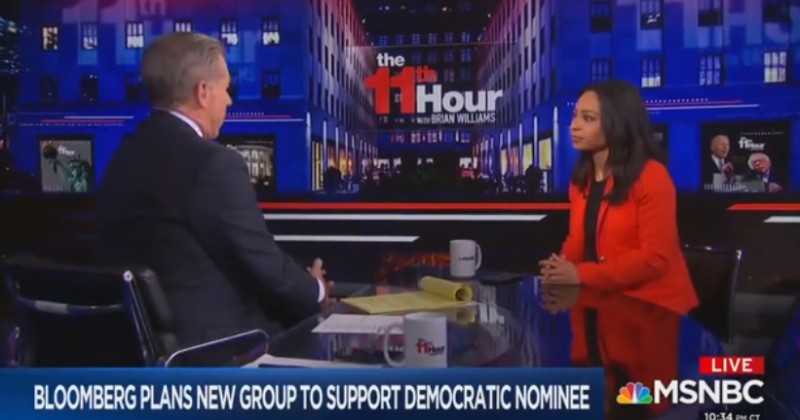 New York Times editor Mara Gay and MSNBC host Brian Williams faced humiliation after they erroneously suggested that Mike Bloomberg’s $500 million ad spend could have been used to give each American $1 million dollars.

The farce began with a tweet by Mikita Rivas, which some people claimed was satirical, stating, “Bloomberg spent $500 million on ads. The U.S. population is 327 million. He could have given each American $1 million and still have money left over. I feel like a $1 million check would be life-changing for most people. Yet he wasted it all on ads and STILL LOST.”

New York Times Editorial Board Member Gay then appeared on Brian Williams’ MSNBC show to claim “Actually with the money he spent he could have given every American a million dollars.”

Williams then displayed the tweet on screen before commenting, “When I read it tonight on social media it all became clear.”

The host then read some of the tweet before remarking, “It’s an incredible way of putting it.”

I don’t feel like that’s the correct math. pic.twitter.com/ASjlbQUIyN

Except that it’s not true.

As anyone who can perform basic math would know, $500 million divided by 327 million Americans is about $1.53 per person. Not $1 million with money left over.

With news anchors and guests like this, is it any wonder that much of the mainstream media is now a complete laughingstock?

@msnbc really? You put this on the air with only Brian Williams weak caveat about “being ahead of you on the math”? Shameful and embarrassing. Poor ⁦@MekitaRivas⁩ will never live this down…Bloomberg isn’t a Trillionaire 😂 pic.twitter.com/hMNyUVwNK7