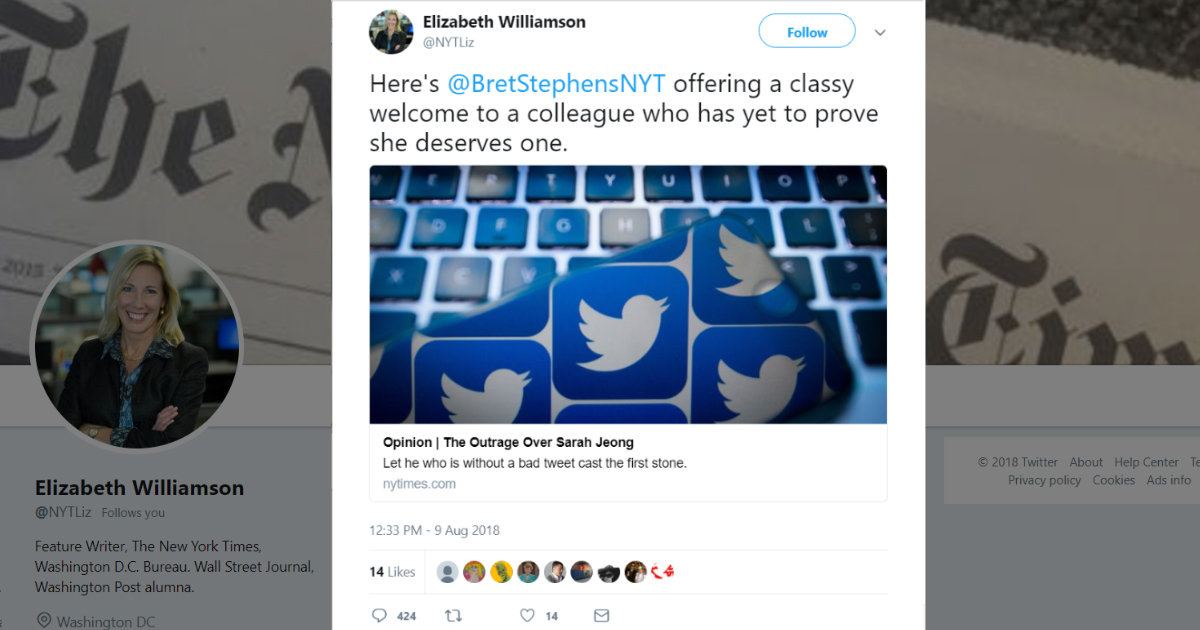 A New York Times writer was shouted down by leftists after she called out her editorial board’s racist new hire Sarah Jeong.

Infowars-obsessed writer Elizabeth Williamson was forced to delete a tweet Thursday criticizing Jeong after a Twitter mob descended on her.

In the supposedly offensive tweet, Williamson promoted an opinion piece from colleague Bret Stephens while commenting, “Here’s @BretStephensNYT offering a classy welcome to a colleague who has yet to prove she deserves one.”

As The Wrap explains, “An outraged mob of Jeong defenders swiftly swarmed the tweet, generating hundreds of comments.”

I just deleted my earlier tweet about this column. It was inappropriate. I apologize. https://t.co/Z6tNMHHzMD

“I just deleted my earlier tweet about this column. It was inappropriate. I apologize,” wrote Williamson.

However, Williamson’s tweet was nowhere near as inappropriate as those published by Jeong, who made numerous hateful statements against white people, police officers and men in general.

“Are white people genetically predisposed to burn faster in the sun, thus logically being only fit to live underground like groveling goblins,” the former Verge editor wrote in one tweet.

“Oh man it’s kind of sick how much joy I get out of being cruel to old white men,” Jeong wrote in another racist tweet.

Maybe instead of issuing this lame non-specific mea culpa, you apologize to the colleague you just took a totally unnecessary swipe at?

Too late, the entire Internet has seen it by now. Do the words "hostile work environment" mean anything to you, since the meaning of showing class clearly eludes you?

ironically, revealing that you absolutely do not deserve a column

You’re bad at your job

Following discovery of her tweets, Jeong claimed she was trolling her trolls, while The New York Times issued a statement defending their decision to hire her.

NYT Reporter Asks Alex Jones If He Is A Russian Agent pic.twitter.com/P3eqOk8vFa