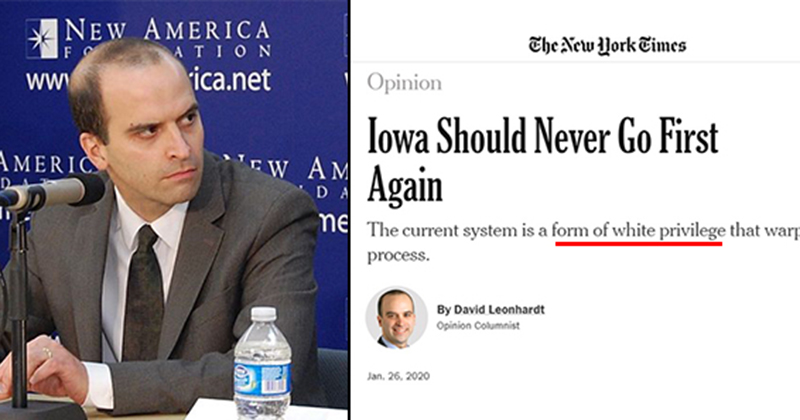 New York Times columnist and Yale grad David Leonhardt is sick and tired of rural folks in Iowa with “white privilege” oppressing coastal elites like himself by having a say in how the country is run.

In his latest column for the Times, Leonhardt demands that the Iowa caucus “never go first again” as it is “among the country’s whitest states.”

From The New York Times (Archive), “Iowa Should Never Go First Again: The current system is a form of white privilege that warps the process.”

The 2020 cycle should be the last time that Iowa and New Hampshire benefit at the country’s expense.

The strongest part of the case for change, of course, is the racial aspect of the current calendar. Iowa and New Hampshire are among the country’s whitest states. About 6 percent of their combined population is black or Asian-American. Almost 87 percent is non-Hispanic white, compared with 60 percent for the country as a whole. Demographically, Iowa and New Hampshire look roughly like the America of 1870.

Patrick Howley joins Tom to discuss why the Democrats have still not settled on a candidate to go against Trump and why the globalists will still pick the eventual winner.

Or consider that a candidate with strong white support (like Bernie Sanders) could win both Iowa and New Hampshire this year. That result would create a media narrative about Joe Biden’s campaign being badly wounded, even though Biden leads among two large groups of Democratic voters: African Americans and Latinos. Those voters, however, are told to wait their turn.

[…] All of this skews the campaign. And it’s another form of privilege for groups that already benefit from the Senate and Electoral College — white voters, older voters and voters outside of major metropolitan areas.

[…] Obviously, politicians in Iowa and New Hampshire will fight any such change, as they always have. They’ll use lofty language, about how solemnly they take their responsibilities and how the current system allows the voices of ordinary citizens to be heard. Strip away the rhetoric, though, and their argument comes down to this: We’re better than the rest of you, and we deserve special treatment forever.

“We’re better than the rest of you, and we deserve special treatment forever” sounds like a perfect summation of the core beliefs of everyone who works at the New York Times.