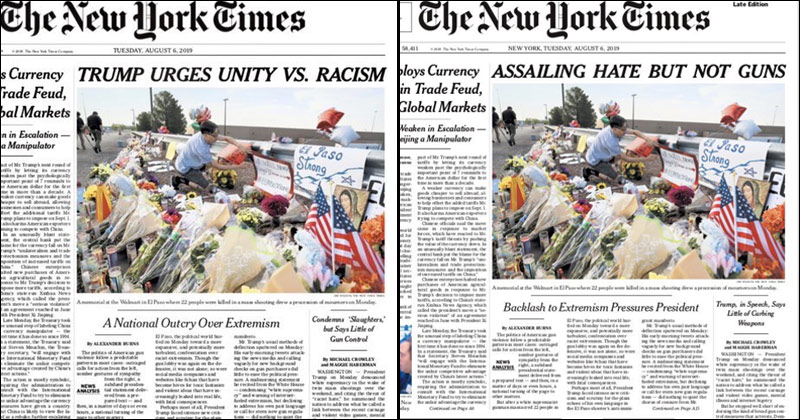 The New York Times was set to run a headline framing Trump in a positive light, before a left-wing outrage mob prompted them to change it.

A screenshot of Tuesday’s NYT front page showed the Times’ headline for a front page story about the El Paso shooting was originally titled, “Trump Urges Unity Vs. Racism,” focusing on the president’s unifying comments in the wake of the tragedy.

Not sure "TRUMP URGES UNITY VS. RACISM" is how I would have framed the story. pic.twitter.com/quOibXsp32

“Not sure ‘TRUMP URGES UNITY VS. RACISM’ is how I would have framed the story,” Nate Silver tweeted in response to the newspaper’s top headline.

Anti-Trump leftists agreed with Silver and threatened to cancel their subscriptions, popularizing the hashtag #CancelNYT on Twitter overnight.

Responding to the perceived outrage, the newspaper released a second edition, with the headline changed to one with a much more negative tone, “Assailing Hate But Not Guns,” giving the impression that President Trump isn’t doing enough to stem what the left refers to as “gun violence.” 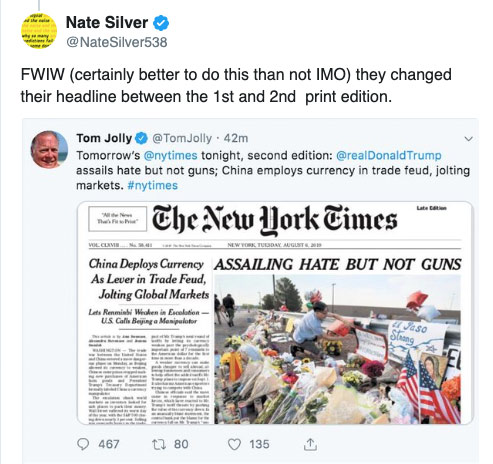 For supporters of the president, the headline change was more of the same from a media outlet which has repeatedly proven itself to be an anti-Trump publication.

You thought The NY Times was doing “journalism”? pic.twitter.com/KBT0Q9Dlw4