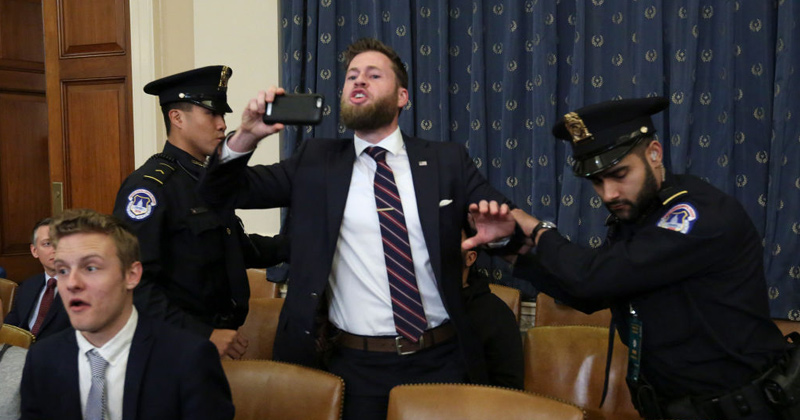 The New York Times called for Infowars host Owen Shroyer to be banned off Twitter after he live-streamed himself disrupting House impeachment proceedings Monday morning. 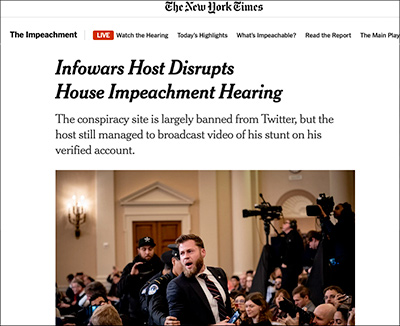 On Monday, The Times asked why the social media site hasn’t taken action against Shroyer, despite other Big Tech conglomerates banning Infowars and its proprietor Alex Jones in recent years.

“But one of the site’s personalities still managed to disrupt the House impeachment hearing on Monday, using his verified Twitter account to carry out a publicity stunt.”

The Times went on to recite a list of grievances falsely attributed to Infowars by Big Tech, prior to a simultaneous ban across numerous platforms on August 8, 2018.

“Yet Mr. Shroyer remains active on Twitter, where he has more than 120,000 followers, and effectively used the site and its streaming video service, Periscope, to promote his interruption as Mr. Nadler began his opening statement,” The Times writes, echoing efforts by CNN commentator Oliver Darcy to ban Infowars on Facebook.

Of course instead of just reporting on Owen Shroyer’s protest at the #ImpeachmentHearing the NT Times is calling for him to be banned from social media! https://t.co/GvXnRJvMzc

“We know who committed the crimes and it wasn’t Trump – Trump is innocent!” Shroyer yelled as he was escorted out of the committee chamber.

The Times was also perplexed at how Infowars has managed to remain influential, despite Big Tech bans on conservative content.

“Mr. Shroyer’s stunt during the widely televised hearing came despite efforts by major technology companies to wipe Infowars and most of its content from their platforms, as they struggle to contain the spread of misinformation online.”

Treading familiar ground, The Times also attempts to tie Shroyer to Sandy Hook, and does not fail to mention “Donald Trump” to Infowars based on his historic 2015 interview.

Of course, the real reason The NYT would like Infowars taken down is to be able to control and steer the narrative going into the 2020 election.