Just as they threw their considerable weight behind Rick Santorum last week in a successful bid to prevent Ron Paul from finishing in the top two in Iowa, the establishment media has now turned to former Obama administration official Jon Huntsman in a desperate move to block Paul from winning the “anyone-but-Romney’ crown in New Hampshire. 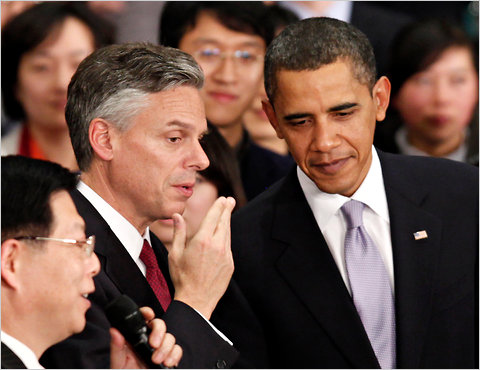 Although polls show Paul has a comfortable lead over Huntsman going into tonight’s primary, we are seeing a mirror image of last week’s rhetoric in that the media is trumpeting Huntsman as the candidate with the most “momentum” in the final hours before voting.

Forget about the powers that be not wanting Paul to win, they’re petrified of him event finishing a distant second. The establishment is terrified that Ron Paul could take the silver medal because it could provide the Congressman with the momentum he needs to emerge as the primary challenger to Mitt Romney going forward.

That’s why the likes of CBS News have even sunk to the depths of editing out Ron Paul’s second place finish from on-screen poll result graphics as well as on-air discussions.

As Reason’s Brian Doherty writes today, ” That Huntsman might pull ahead of Paul into second today in New Hampshire has been widely said with very little evidence, which certainly feeds into the Paul fan paranoid narrative that the media is desperate for anyone-but-Paul to become the anointed anyone-but-Romney. I am even now watching cable tv pundits, presenting the current 20-13 Paul-Huntsman polling, still talking as if Huntsman beating him is reasonable to expect today.”

Even liberals like Slate’s Dave Weigel are urging disgruntled Democrats to act as Paul spoilers in the GOP race by voting for Huntsman, ludicrously claiming that Huntsman can defeat Obama when the latest poll shows he would be easily beaten by the President, while Paul is almost tied with Obama in a hypothetical run-off, second only to Romney.

The corporate press is obsessed with their self-fulfilling prophecy of claiming Ron Paul has no chance of winning the GOP nomination, but Huntsman has even less chance. He’s not even on the ballot in Virginia or Arizona.

Huntsman is about as conservative as Karl Marx. He’s a vehement climate change believer, a firm ally of Harry Reid, has strongly opposed the Tea Party movement and to top it all off, he’s a former Obama administration official. How this man can be framed as a legitimate alternative to Ron Paul anywhere outside of the Twilight Zone of the establishment media is beyond a joke.

Described as “Barack Obama’s secret weapon” by some conservatives, Huntsman is likely to drop out of the GOP race, run as an Independent and take enough votes away from whoever turns out to be the Republican candidate in order to ensure Obama’s re-election.

If we are to set aside concerns about the same electronic voting machines which disenfranchised Paul in New Hampshire back in 2008, along with missing votes for Paul that were not counted, and presume that the establishment’s rush to promote Huntsman will be sufficient to sway enough genuine voters for Huntsman to take second place, the clincher could very well end up being a “false flag” most likely launched by the Huntsman campaign itself.

An independent analysis of the offensive anti-Huntsman ad which the media rushed to blame on Ron Paul supporters and which Huntsman himself seized upon to exploit the moral high ground concludes that the ad was in all likelihood created by the Huntsman campaign and had nothing to do with Ron Paul or his supporters.

“There was never any reason to believe it,” writes Doherty. “The ad arose from a YouTube account and group name “NHLiberty4Paul” that had never had any public presence before, no Paul fan had ever shown a sign of thinking Huntsman was of interest to them, it was circulated not through any of the many existing channels where Paul fans gather and talk but rather from Huntsman’s own campaign, Huntsman made much anti-Paul hay from it. Although it’s hard to learn who is responsible for things posted on YouTube, there is more reason to think a Huntsman partisan was responsible than that a Paul one was.

Indeed, the independent analysis shows that the first URL referral to the ad came from the Huntsman campaign’s internal email server, before it had been posted on any other website besides that created by its anonymous author.

The polls show that Ron Paul should secure second place in New Hampshire tonight and that’s the result the vast majority of our readers will be rooting for. However, don’t be surprised if a combination of the establishment throwing its weight behind Huntsman, in addition to the dirty tricks on behalf of the Huntsman campaign, added to Diebold electronic voting machines and a history of vote fraud in the state, all combine to disenfranchise Paul once more and give the media the opportunity to ignore and dismiss his campaign yet again.