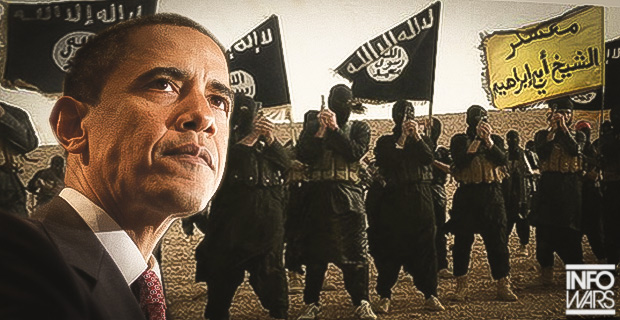 President Obama authorized a shipment of guns to the Syrian opposition, a.k.a. ISIS-linked militants, on the exact same day he demanded more gun control in response to the Oregon shooting.

Even more shocking, Obama did the very same thing after the 2013 D.C. Navy Yard shooting.

The president approved the re-arming of the Syrian opposition, which predominantly consists of ISIS and its affiliates, on Oct. 1, the same day Obama suggested the U.S. should start banning guns after the Umpqua Community College shooting.

“The approval came at a National Security Council meeting on Thursday,” CNN reported. “…The President also emphasized to his team that the U.S. would continue to support the Syrian opposition as Russia enters the war-torn country.”

Virtually all of the rebels in Syria have pledged allegiance to the Islamic State since at least 2013.

“The Free Syrian Army and the Syrian National Council, the vaunted bulwarks of the moderate opposition, only really exist in hotel lobbies and the minds of Western diplomats,” journalist Ben Reynolds wrote in November. “There is simply no real separation between ‘moderate’ rebel groups and hardline Salafists allied with al-Qaeda.”

The New York Times made a similar statement.

“Nowhere in rebel-controlled Syria is there a secular fighting force to speak of,” the newspaper reported in 2013.

Recently a group of Pentagon-trained “moderate rebels” known as Division 30 handed their weapons over to the Syrian al-Qaeda affiliate Jahbat al-Nusra.

The Pentagon had trained the group as part of a PR stunt to counter the fact that nearly all Syrian rebels are affiliated with ISIS.

“[Division 30] handed over a very large amount of ammunition and medium weaponry and a number of pick-ups,” a tweet from al-Nusra member Abu Fahd al-Tunisi stated.

And while Obama is arming these Islamic extremists who are beheading Christians and throwing gays off of buildings, he’s trying to disarm peaceful, law-abiding Americans.

“Each time this happens [a mass shooting] I am going to say that we can actually do something about it, but we’re going to have to change our laws,” he said Oct. 1.

However, it’s unlikely the Obama administration is requiring the ISIS-linked Syrian opposition to face the same restrictions and undergo the same background checks as gun owners in America.

In 2013, Obama waived a provision in federal law specifically designed to keep the U.S. government from supplying firearms to terrorist groups, according to the Washington Examiner.

On the very same day he waived the provision, he announced he was drafting executive orders for more gun control in response to the D.C. Navy Yard shooting.