Dredging up Dickensian horrors of child labor, the Obama administration has ordered the Labor Department to apply child labor laws to family farms. The new rules would make it illegal for children to perform a large number of labor tasks that have been performed by farm families for centuries. Traditionally, adults and children alike helped with planting and harvesting in the spring and fall, but the federal government is now determined not only to make this a historical footnote, but a criminal offense. 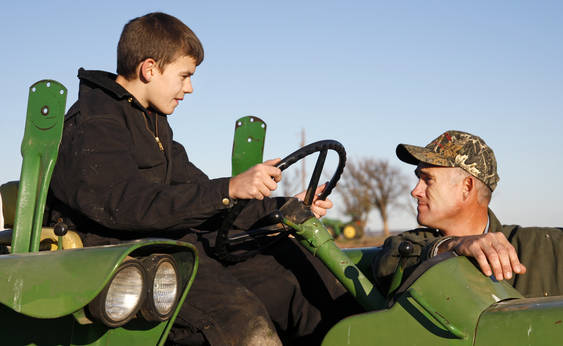 Children have worked with their families on farms for centuries. It is the reason there is now a “summer vacation” for school kids.

Under the rules, children under 18 would be prevented by the federal government from working “in the storing, marketing and transporting of farm product raw materials” and prohibited “places of employment would include country grain elevators, grain bins, silos, feed lots, stockyards, livestock exchanges and livestock auctions.”

In addition to making it far more difficult for families to work their farms, the new rules will revoke the government’s approval of safety training and certification taught by independent groups like 4-H and FFA and replace them with a 90-hour federal government training course, the Daily Caller reports.

In other words, the federal government will forcibly insert itself in the business of teaching animal husbandry and crop management, disciplines traditionally passed on by families and local communities.

Government apparatchiks will now oversee the business of local farming the same way Stalin did when he collectivized farms and “socialized” production at gunpoint in the Soviet Union. Resistance by farmers and peasants to Stalin’s efforts resulted in the government cutting off food rations, which resulted in widespread famine (the “terror-famine in Ukraine” killed around 12 million people) and millions were sent to forced labor camps.

“According to this new executive order, the Obama administration plans to stick its itchy little fingers into just about every aspect of rural life,” the Economic Collapse Blog noted at the time. “One of the stated goals of the White House Rural Council is to do the following….”

Obama’s plan to make life miserable for family farmers coincides with an effort by the United Nations under Agenda 21. Section one of the executive order mentions “sustainable rural communities,” language right out of Agenda 21. (For more on the draconian aspects of Agenda 21 and the plan to roll back modern civilization under the aegis of “sustainability,” see Rosa Koire’s Behind the Green Mask: U.N. Agenda 21.)

“In Late May, the DOT proposed a rule change for farm equipment, and if it this allowed to take effect, it will place significant regulatory pressure on small farms and family farms all across America – costing them thousands of dollars and possibly forcing many of them out of business,” writes Mike Opelka. “The Federal Motor Carrier Safety Administration (FMCSA), part of the Department of Transportation (DOT), wants new standards that would require all farmers and everyone on the farm to obtain a CDL (Commercial Drivers License) in order to operate any farming equipment. The agency is going to accomplish this by reclassifying all farm vehicles and implements as Commercial Motor Vehicles (CMVs).”

Late last year, House Republicans moved to prevent the EPA from further burdening farmers with a rule that would ban “farm dust.” Outrage in response to the proposed regulation came fast and furious and EPA boss Lisa Jackson was forced to back down as Democrats complained that the government was not targeting small family farms with the proposed regulation.

A concerted effort by the federal government to attack small family farms cannot be denied. Infowars.com has covered dozens of efforts, including the attack on Rawesome Foods in California, numerous efforts by the feds to attack raw milk and dairy farmers (including attacks by the FDA on Amish farmers), and a recent effort by the Department of Natural Resources in Michigan to destroy open-range pig farms.

In addition to attempting to micromanage – and run out of business – family farms through federal labor regulations, the government is trying to insert itself in the relationship between parents and their children.

The ongoing attacks on family farming are not merely misguided efforts by control freak bureaucrats. They are part of a larger “comprehensive plan of action” to be taken globally, nationally and locally by organizations of the United Nations to institute “sustainable development,” a philosophy designed to bring humanity under tight control of the global elite.

As George H. W. Bush said on September 11, 1990, the plan is “based entirely on social control mechanisms.” For the elite, controlling food – especially healthy and natural food produced by family farms – is a primary objective in their plan for global conquest.