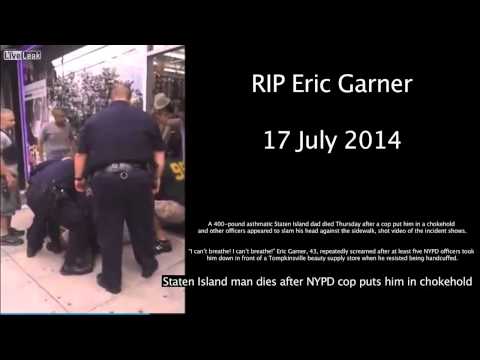 They say a broken clock is right twice a day and that old adage proved true last night when President Obama made the point that the proper response to the Eric Garner controversy should be to focus on police brutality, not race.

Protesters flooded the streets of New York last night after a grand jury decided not to charge Officer Daniel Pantaleo in the death of 43-year-old Eric Garner, who was choked to death for the crime of selling untaxed cigarettes. Video footage of the incident clearly shows that Garner offered little or no resistance and was not acting aggressively towards officers during the arrest.

Despite an army of social justice warriors immediately reacting to the decision by stoking yet more racial division, it was left to none other than President Obama to remind Americans that police brutality is an issue that impacts everyone and should not be about race.

By the evening, the hashtag #CrimingWhileWhite was trending and Caucasians were falling over themselves to apologize for their “white privilege” by telling anecdotal tales of how they had escaped police retribution after committing minor offenses.

Absent from the discussion was the fact that “white privilege” counted for very little in the cases of both Kelly Thomas and James Boyd, both white, both homeless, both of whom were summarily executed by police officers as they begged for their lives – just like Eric Garner.

Instead of what should have happened – conservatives and liberals, blacks and whites – unifying against police brutality, the left has managed to turn the Ferguson protests and the Eric Garner backlash into Occupy 2.0 – a divisive faux “revolution” which will go nowhere because it alienates half the population of the United States.

Instead of having a nuanced debate about what drives police profiling of black people and why cops immediately resort to violence in many cases, collectivists have ensured that the narrative is focused solely on “white guilt,” a misdirection that only serves to fuel a cultural race war, while communist groups have also hijacked the cause to push anti-capitalist economic sectarianism.

FBI crime statistics show that black people commit almost the same number of homicides as whites and Hispanics put together, yet they represent only 13 per cent of the population. Again, despite representing only a fraction of the population, 93 per cent of blacks are killed by other blacks, according to Justice Department figures.

This problem of criminality and violence in the black community has nothing to do with skin color and everything to do with the glamorized ‘thug life’ culture promoted by (white-owned) entertainment companies via hip-hop and rap music.

The problem of brutality and abuse of force amongst police officers has nothing do with skin color and everything to do with increased militarization and federal training which encourages cops to see citizens as the enemy in a warzone.

Both of these integral factors have received little or no attention as a result of social justice vultures making the issue all about race. This isn’t about “white privilege,” it’s about “blue privilege,” a system that allows cops to get away with murder no matter the skin color of the victim.

This misplaced anger can only please the establishment, since it ensures that everyone is kept locked into a futile furore of blaming each other while the true causes of police brutality directed towards both the black community and the wider population remain unaddressed.