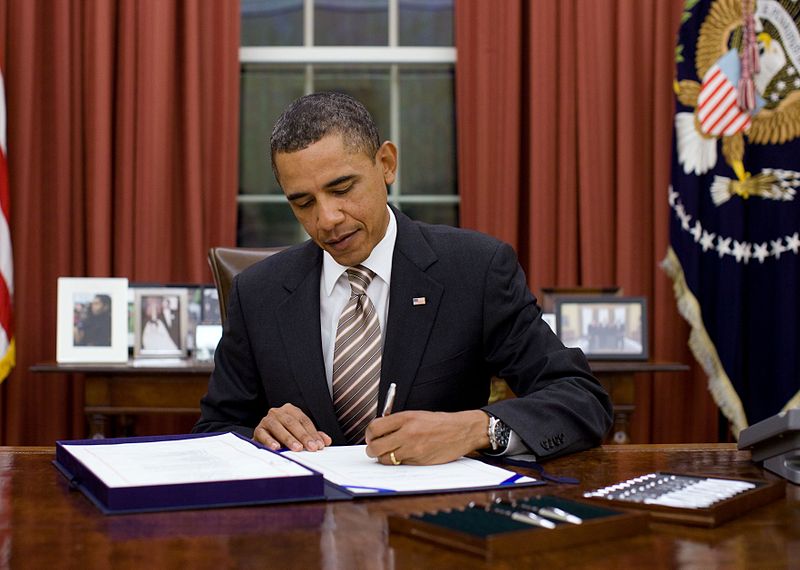 In April of this year President Barack Obama, claiming powers vested in him during an “International Economic Emergency” and “National Emergency” signed Executive Order 13572;  Blocking Property of Certain Persons With Respect to Human Rights Abuses in Syria. Essentially, it gives him the power to seize assets of Syrians suspected of being complicit in human rights abuses.

This incredibly vague standard gives the president the power to determine who ends up with the control of wealth in Syria. The EO describes the broad accusations that can be deemed sufficient enough by the State Department or Treasury Department to render asset seizures:

(i) to be responsible for or complicit in, or responsible for ordering, controlling, or otherwise directing, or to have participated in, the commission of human rights abuses in Syria, including those related to repression;

(ii) to be a senior official of an entity whose property and interests in property are blocked pursuant to this order;

(iii) to have materially assisted, sponsored, or provided financial, material, or technological support for, or goods or services in support of, the activities described in subsection (b)(i) of this section or any person whose property and interests in property are blocked pursuant to Executive Order 13338, Executive Order 13460, or this order; or

(iv) to be owned or controlled by, or to have acted or purported to act for or on behalf of, directly or indirectly, any person whose property and interests in property are blocked pursuant to Executive Order 13460 or this order.

If events leading up to Libya’s “liberation” are any indicator, this Executive Order is the first step in engaging in an interventionist “humanitarian war”.  In February of this year Obama signed an eerily similar Executive Order 13566, Blocking Property and Prohibiting Certain Transactions Related to Libya. Again, Obama declared the situation in Libya a “national emergency” in order to obtain the power to economically assassinate Qadhafi and anyone loyal to him:

I, BARACK OBAMA, President of the United States of America, find that Colonel Muammar Qadhafi, his government, and close associates have taken extreme measures against the people of Libya, including by using weapons of war, mercenaries, and wanton violence against unarmed civilians. I further find that there is a serious risk that Libyan state assets will be misappropriated by Qadhafi, members of his government, members of his family, or his close associates if those assets are not protected. The foregoing circumstances, the prolonged attacks, and the increased numbers of Libyans seeking refuge in other countries from the attacks, have caused a deterioration in the security of Libya and pose a serious risk to its stability, thereby constituting an unusual and extraordinary threat to the national security and foreign policy of the United States, and I hereby declare a national emergency to deal with that threat.

This Executive Order was executed less than a month before the U.N. Security Council resolution for the so-called “No-Fly Zone” that has now festered into nightly bombings of Libya’s capital city and the actual targeted assassination of their sovereign leader.

This appears to be the modern imperial playbook for starting preemptive humanitarian wars for the purpose of regime change. Step one; seize the assets of the group currently running a country to weaken them. Step two; build strategic popular support for humanitarian intervention.  Step three; bomb the humanity back into the country and kill the rightful leader. Step four; install globalist puppets to control the flow of the country’s currency and assets. Step five; move on to the next “oppressive” regime, bypassing the mirror of conscience.

One thing is for certain, Syria is next on the globalist chopping block despite the West’s clear involvement in spearheading the opposition movement there.  The U.S. president can now conveniently claim the powers of international economic emergency and national emergency to circumvent any checks and balances to justify nearly any act of imperial tyranny.  And 2011 is shaping up to be a Blitzkrieg by Western powers to take out the remaining global chess pieces that oppose their domination.