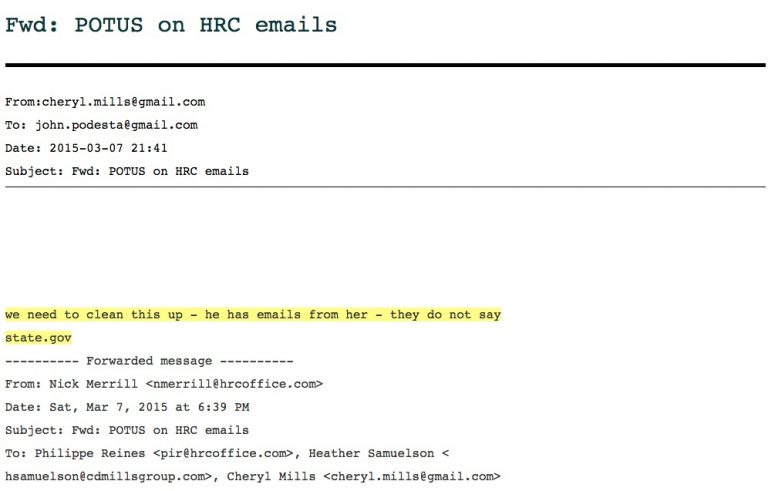 President Obama lied when he told the American people he was unaware of Hillary Clinton’s use of a private email server, new emails obtained by Wikileaks confirm.

In an email dated March 7, 2015, Clinton campaign operatives discussed how they need to “clean up” the situation after the president denied having any knowledge of Hillary’s private server during an appearance on CBS News.

“Jen [Palmieri] you probably have more on this but it looks like POTUS just said he found out HRC was using her personal email when he saw it in the news,” Clinton aide Josh Schwerin wrote to staffers.

Schwerin was referring to a statement made by Obama to CBS News senior White House correspondent Bill Plante in which he claimed to have learned about Hillary’s private email server “The same time everybody else learned it, through news reports.”

I have some questions here pic.twitter.com/ufkeoZCx2m

In a response on the issue sent to Podesta three hours later, longtime Clinton aide Cheryl Mills stated, “We need to clean this up – he has emails from her – they do not say state.gov.”

The president’s press secretary, Josh Earnest, began the “clean up” the next day.

“The president, as I think many people expected, did over the course of his first several years in office exchange emails with his secretary of state,” Earnest stated at the time.

“The point that the president was making is not that he didn’t know Secretary Clinton’s email address – he did.”

“But he was not aware of the details of how that email address and that server had been set up, or how Secretary Clinton and her team were planning to comply with the Federal Records Act,” Earnest claimed.

Another Wikileaks dump earlier this month also showed John Podesta was worried about turning over emails showing correspondence between the president and Hillary AFTER they had been subpoenaed under an FBI investigation. 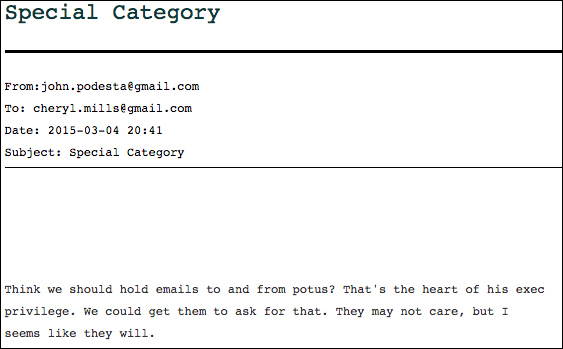