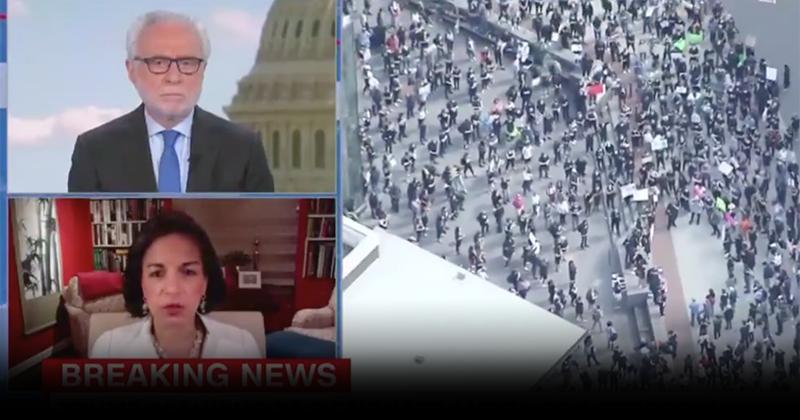 In a bizarre claim, Barack Obama’s former National Security Advisor Susan Rice said Sunday that the rioting and violence being witnessed in major American cities is “right out of the Russian playbook.”

Appearing on CNN’s The Situation Room with Wolf Blitzer, Rice appeared to seriously suggest that the Russian government is stoking unrest inside America, rather than the rioting being coordinated by ANTIFA thugs or non-peaceful Black Lives Matter agitators.

"This is right out of the Russian playbook" pic.twitter.com/luXiPV0bOq

“I’m not reading the intelligence today, or these days — but based on my experience, this is right out of the Russian playbook,” Rice declared.

“But we cannot allow the extremists, the foreign actors, to distract from the real problems we have in this country that are longstanding, centuries old, and need to be addressed responsibly.” She added.

Blitzer just nodded along without challenging the absurd claim, noting “you’re absolutely right on the foreign interference,” and then suggesting that Russia could be trying to “embarrass” America by “promoting the racial divide in our country.”

“Well we see it all the time, we’ve seen it for years, including on social media where they take any divisive, painful issue… and they play on both sides,” Rice returned.

“I would not be surprised to learn that they have fomented some of these extremists on both sides on social media… [or] that they’re funding it in some way, shape, or form,” Rice added.

Imagine how hard Americans would laugh if Russian officials and pundits blamed American spies for stoking ethnic tensions in the Caucasus. That's how dumb this stuff looks to the world outside America. https://t.co/6HhOyicdAU

In an Olympic level feat of pretzel-twisting, hoax hustler Rice manages to shoehorn the Russians into the narrative yet again! #ObamaGateLizard https://t.co/bEcj0d5Xly