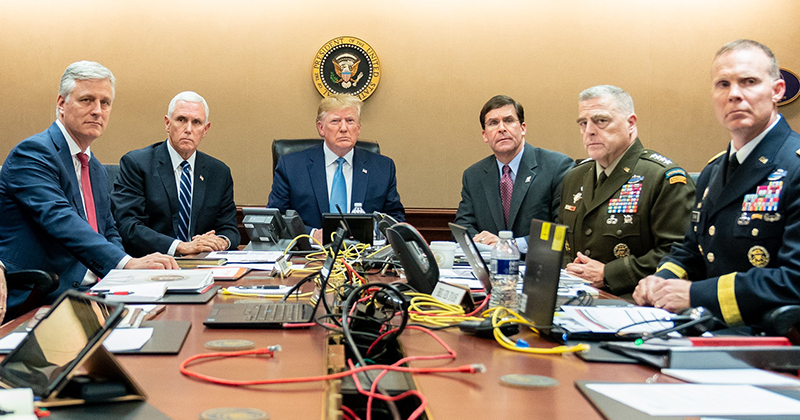 A photographer who has worked extensively with Barack Obama spread conspiracy theories Sunday regarding a photograph released by the White House of President Trump and numerous officials watching the US Special Operations forces raid that killed ISIS leader Abu Bakr al-Baghdadi.

Souza’s “evidence” was that some reports suggested the raid began at 3:30pm Washington time, yet the photo timestamp says the image was taken at 17:05:24, local Washington DC time, over 90 minutes later.

Trump himself stated that “We were pretty much gathered at five o’clock yesterday…the attack started moments after that.”

Just to be clear, I didn't say it was staged. Trump himself said he didn't arrive to the Situation Room until "around 5pm". So it's definitely possible the photo was taken during the raid. https://t.co/h3yx8BbLAT

The fake news had already spread, however, with the blue check brigade, media and Democrats ‘outraged’ that Trump was at his golf course at 3:30 p.m. on Saturday, and not watching US soldiers conducting the raid.

I was the White House pool reporter on Saturday: Trump was in the motorcade from his golf club from 3:33 p.m. until 4:18 p.m., wearing blue pullover, khaki pants and a red cap.

Trump on the golf course “wait don’t give it away, I wanna be surprised when we replay it”

Others suggested that the photo was fake because there are unplugged network cables:

Why are all the computer and electronic cables unplugged and just laying on the table?

The conspiracy theory train had already left the station.

Whoa hold on now. I didn't say it was staged I just completely implied it so my dense followers could take the next step for me. Great work hero.

My theory is they lied to POTUS and told him he was watching it live, when in fact he was watching something that occurred 90 minutes earlier. They were afraid he would leak if they informed him in real-time.

The photograph evoked memories of the one Souza himself took featuring Obama and Hillary from the 2011 raid on Osama Bin Laden’s compound. At the time, it too was suggested to have been staged.

Much better. Much more realistic pic.twitter.com/zRPLBurJWO

While the Washington Post labeled al-Baghdadi as a ‘scholar’, Bloomberg related how the ISIS leader had successfully ‘transformed himself’:

Islamic State leader Abu Bakr al-Baghdadi transformed himself from a little-known teacher of Koranic recitation into the self-proclaimed ruler of an entity that covered swaths of Syria and Iraq https://t.co/CNI5XBsoai

Media and Democrats piled on, some complaining that Trump hadn’t spoken politely or respectfully enough about ISIS:

Trump compares watching a human getting killed to watching a movie pic.twitter.com/01d8ysFg3M

Admiral James Winnefeld tells @margbrennan that he's worried about Trump's "piling on" by describing al-Baghdadi as a "dog." Says it sends a signal to followers "that could cause them to lash out possibly more harshly in the wake." pic.twitter.com/L6y7a17bm0

Getting back to business! CNN begins bashing Trump following the elimination of the ISIS leader. pic.twitter.com/wqA5HoAE6d

MSNBC's Vossoughian: I wonder here if this type of killing only reinforces the ideology of Baghdadi's followers pic.twitter.com/MoZHIfZ3Ws

Some, like journalist Glenn Greenwald, pointed out the grim fascination of watching Democrats deal with the situation:

It's genuinely fascinating watching Democrats in real time struggle to figure out what to say about this. They want to be patriotic and anti-ISIS, but also need a way to malign Trump without contradicting their gushing Obama praise over OBL: not an easy balancing act. Good luck!

"You know, it's a sad day in America when the Democrats can't stand up and thank the President, thank the U.S. military for taking out the leader of ISIS last night. That's a tragedy, here is the problem, Maria, the Democrats have impeachment obsession…" – @SteveDaines pic.twitter.com/b19vT6XVec

It should be pointed out that after the Bin Laden raid in 2011, this was Trump’s reaction:

I want to personally congratulate President Obama and the men women of the Armed Forces for a job very well (cont) http://tl.gd/a7dhom

I want to personally congratulate President Obama and the men [and] women of the Armed Forces for a job very well done. I am so proud to see Americans standing shoulder to shoulder, waving the American flag in celebration of this great victory.

We should spend the next several days not debating party politics, but in remembrance of those who lost their lives on 9/11 and those fighting for our freedom. God Bless America.