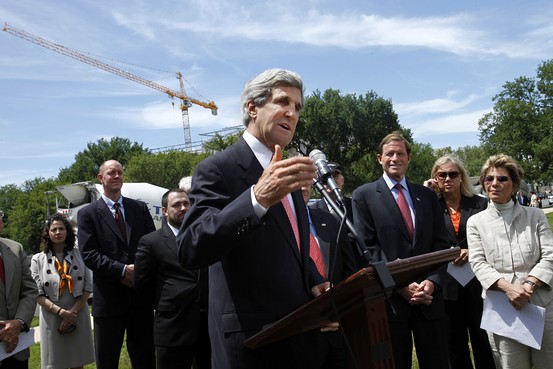 You can bet that questions pertaining to Skull and Bones membership won’t be asked at this year’s mock debates. Senator John Kerry is set to warm Obama up by playing his opposition in a series of debates prior to the actual debates in October.

The Washington Post reports: “Kerry has long been considered one of the Democratic Party’s most skilled debaters, and his performances in more than 25 debates in the 2004 race earned plaudits. Some credited his strong debates against President George W. Bush with tightening the race in the closing weeks of the 2004 campaign.”

You’ll remember John Kerry as the democratic candidate in the 2004 presidential election against George W. Bush, or from his notable 2004 interview with Tim Russert of NBC’s Meet The Press.

The secret Yale fraternity that both George W. and John Kerry belonged to apparently follow the same rules as Fight Club; you don’t talk about it. In his own words George W. Bush tells Russert, “It’s so secret we can’t even talk about it.”

No Mr. Kerry, no one has forgotten that you are a member of the Order of Death, or that you attended this past 2012 Bilderberg conference.

The Post also mentions that Kerry “is among the candidates believed to be under consideration to succeed Clinton at the State Department in a second Obama administration,” a decision that is probably already known to attendees of this past year’s globalist confab.

Mainstream media says Kerry’s a good debater, knows Romney’s record, and is from the same state, but the real issue? The 2004 election was already decided for you, just as the 2012 election is.

Wikipedia.org: The logo of Skull and Bones.

Most recently the Senator has been campaigning for the signing of the United Nations Convention of the Law of the Sea, a treaty that would create yet another international bureaucracy intended to limit the sovereignty of the U.S. and further globalist regulations.

“For reasons of economic competitiveness and national security, the vast array of experts believe signing this treaty is necessary,” the Bonesman told GlobalPost.com. This guy’s not even promoting U.S. interests; he’s working for the globalist U.N.

Surely, the powers-that-be would like us to forget that our leaders are related and members of secret societies. They would like us to believe that there are no shadow puppet masters pulling their strings, but we know better.

In fact, it’s time for a trip down memory lane back to 2004 where Kerry inadvertently admits to being part of the club; cue up the Meet the Press tape (below follows a transcription of the Kerry portion):

Mr. Russert: You both were members of Skull and Bones, a secret society at Yale. What does that tell us?

Sen. Kerry: Not much because it’s a secret.

Sen Kerry: I wish there were something secret I could manifest there.

Sen Kerry: There are all kinds of secrets, Tim. But one thing is not a secret. I disagree with this president’s direction that he’s taking the country. WE can do a better job. And I intend to do it.

Mr. Russert: And we’ll be watching. Be safe on the campaign trail.

So what’s the big deal? Well, speculation surrounding the Bonesmen wouldn’t be so high if Tim Russert hadn’t died four years after that interview, collapsing at a TV station in Washington D.C. at the age of 58. Allegedly, his last words were “What’s happening?”

They don’t mind taking out one of their own that has strayed from the flock. Nevermind that Russert was an obedient member of the Council on Foreign Relations, and had even dressed in drag to entertain the elite at an annual Gridiron Club dinner back in 2006.

As far as we’re concerned he died because he tried to illustrate the magnitude of power the secret group held.

So we’ll watch the mock debates and we’ll be impressed with your skills Mr. Kerry, but all the while we’ll be wondering “Which initiation ritual did Kerry have to undergo to become a full-fledged member? Was it the old lying naked in a coffin recounting his sexual history to his fellow Bonesmen? Or maybe something more sinister?”

The final question is one Mr. Russert posed: What does that mean for America?