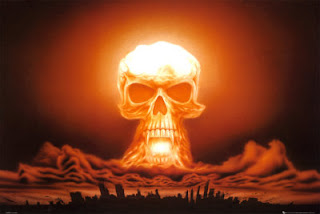 Imagine the potential catastrophic consequences, especially if nuclear weapons are used. They were before. Why not now. The prospect’s chilling.

In his Der Ring des Nibelungen operas (the Ring), Richard Wagner portrayed his apocalyptic version musically. Gotterdammerung (Twilight of the Gods) prophesied the end of the world.

Einstein suggested it, saying he didn’t know what WW III weapons would be used, “but World War IV will be fought with sticks and stones.”

“Shall we put an end to the human race, or shall mankind renounce war” and live in peace. The stark choice is clear. The wrong one suggests consequences too grim to imagine.

It’s terrifying to imagine nuclear bunker-buster bombs used against underground targets. Whatever the physical damage, irradiating vast areas could kill millions, and set a precedent to keep using them like king-sized hand grenades.

A 13,600-kilogram bunker-buster’s being developed. Called “the massive ordnance penetrator,” allegedly it can smash through 65 meters of reinforced concrete before detonating.

Defense Secretary Panetta said work on an array of military options are being considered if sanctions don’t curb Iran’s nuclear program. He added they’ve been underway “a long time,” and Washington’s “weighing all of the ramifications of how best to deal with Iran.”

Yet Obama’s fulfilling Dick Cheney’s promise about wars not ending in our lifetime. Former CIA Director James Woolsey said America’s “engaged in World War IV, and it could continue for years….This fourth world war, I think, will last considerably longer than either World Wars I or II did for us.”

In his September 11, 1990 joint session of Congress speech, GHW Bush called it a “New World Order” ahead of Operation Desert Storm.

In its 2006 Quadrennial Defense Review (QDR), the Pentagon called it the “long war.” It rages daily for unchallenged world dominance, no matter the potentially devastating consequences.

On February 24, The New York Times “Syria’s Horrors” editorial called for “a strategy to end the killing,” and said world leaders have to “try harder.”

Its force strength numbers over 300,000 with 450,000 in reserve. It has thousands of tanks, artillery pieces, cruise and other sophisticated missiles, including S-300s able to “deflect a possible attack by NATO or the US and EU.”

There’s much more as well, including hundreds of ships and aircraft. In a showdown, most Syrians back Assad against Washington, other Western countries and Israel.

Global Firepower ranks Iran number 12. Its active military strength numbers 545,000 with 650,000 more in reserve. Its weapons arsenal is huge and sophisticated. Like Syrians, its people back Ahmadinejad against foreign attack.

When externally threatened, most populations support their government. It’s all they’ve got, especially against menacing forces, and they know it. Washington menaces humanity. Syrians and Iranians understand.

Earlier and now, Assad expressed willingness to negotiate to end violence. His overwhelmingly approved constitution offers hope for change. Washington, Britain, France, other rogue NATO partners, and regional despots want none of it.

“We reject any dialogue while tanks shell out towns, snipers shoot our women and children and many areas are cut off from the world without electricity, communications or water.”

In fact, Western-backed killer gangs bear responsibility for months of violence. Western nations and regional allies supplied them with powerful weapons and training. US, UK and French intelligence and special forces operate covertly. In Homs, dozens of French soldiers were captured.

Assad’s more victim than villain. Violence would stop today if Washington called off its dogs. Instead, it rages out-of-control. Assad’s unfairly blamed. The world heads perilously toward more.

“We cannot agree with the draft resolution in the form it is being presented in today. The text of the resolution under discussion is unbalanced.”

“Its main problem is the absence of a simultaneous call on all sides to take practical steps in the context of ceasing fire.”

“We continue complex consultations in NYC on the ‘Syrian’ resolution with the aim of reaching the text addressing equal demands for both parties.”

“We will not agree with any UN Security Council resolution on Syria containing clues for use of force against the country. Ambiguities are unacceptable.”

China’s UN envoy Li Baodong said Beijing’s “firmly opposed to the use of force to solve the Syrian problem and resolutely opposes pushing for forced regime change in Syria, as it violates the United Nations Charter and the basic norms guiding the practice of international relations.”

Nonetheless, John McCain’s call for bombing Syria may attract more Washington support for direct intervention. He’s the ranking Republican Armed Services Committee member. Last year, he was among the first in Congress for attacking Libya. It got traction. It may again followed by Iran.

On March 5, its editorial headlined “Iran, Israel and the United States,” saying:

“Iran’s nuclear appetites are undeniable, as is its malign intent toward Israel, toward America, toward its Arab neighbors and its own people. Israel’s threats of unilateral action have finally focused the world’s attention on the danger.”

Iran threatens no one. Washington, Israel, its neighbors, and Times editors know it. They lied about Tehran’s nonexistent threat and peaceful nuclear program. It complies fully with Nuclear Non-Proliferation Treaty (NPT) provisions. Washington long ago abandoned them. Nuclear armed and dangerous Israel ignores them.

Judith Miller played the lead role. Her daily feature front page Pentagon handouts smoothed the way for destroying the cradle of civilization. Are Syria and Iran next?

America’s “newspaper of record” bears major responsibility for millions of post-9/11 lives lost. No matter, it urges more. It says neither Israel or Tehran should doubt Obama’s resolve “to prevent Iran from obtaining a nuclear weapon” it has no intention to develop.

Haaretz took note several times, including in a March 9 editorial headlined, “Israel must not bind itself to Netanyahu’s vulgar rhetoric on Iran,” saying:

“Anyone who cares about Israel’s future could not help but feel a chill upon hearing Benjamin Netanyahu’s recent speech at the AIPAC conference – if not because of the gravity of the existential threat it described, then because of its sheer vulgarity and bad taste.”

In fact, Israel faces no threat, existential or otherwise. Moreover, invoking the Holocaust and rhetorical gimmicks long ago wore thin. They don’t wash but get repeated ad nauseam because media scoundrels regurgitate them.

Every Netanyahu speech gives them red meat to appear legitimate: “kitsch and death, threats and vows, warnings and rebukes of the entire world.”

“The spine-chilling fear is that one day” we’ll discover too late we’ve been had. It won’t be the first time, but challenging two formidable adversaries may extract a price greater than Israel, the region and beyond can pay. At that point, it’s too late.

“We’re not standing with a stopwatch in hand. It’s not a matter of days or weeks, but also not of years. The result must be removal of the threat of nuclear weapons in Iran’s hands.”

“I hope there won’t be a war,” he added, but strongly suggests Israel’s ready to act jointly with Washington or alone.

In fact, claiming an Iran nuclear threat and blaming Assad for Western-generated violence are red herrings. At issue is replacing independent regimes with pro-Western ones, and for Israel removing regional rivals.

Don’t expect America’s “newspaper of record” or other major media scoundrels to explain. They march in lockstep cheerleading wars and their run-ups, no matter how much death, destruction and human misery they cause.

The best way to hold them accountable is tune them out. Without audience numbers they’ll wither and die. Imagine being free of them. Hopefully it’s just a matter of time.

On March 8, the Atlantic magazine published an Iran War Clock. Set at 10 minutes to midnight, it said odds are even that Washington and/or Israel will attack. A so-called panel of experts was chosen to predict future risks.

They include a former Deputy Assistant Secretary of State for Iran, a Council on Foreign Relations senior vice president, a Deputy Head of Israel’s Institute for National Security Studies, Haaretz’s military correspondent, an anti-Iranian front group head, and others like them.

Claiming impartially, it calls its assessment a collective “gut-check feeling.” In January, the Bulletin of the Atomic Scientists’ Doomsday Clock moved to five minutes to midnight. It was its first change since early 2010. In a statement it said at the time:

“Two years ago, it appeared that world leaders might address the truly global threats that we face. In many cases, that trend has not continued or been reversed.”