Remember when Obama promised to bring the troops home? Well, it is all an illusion, as we noted after he was coronated. 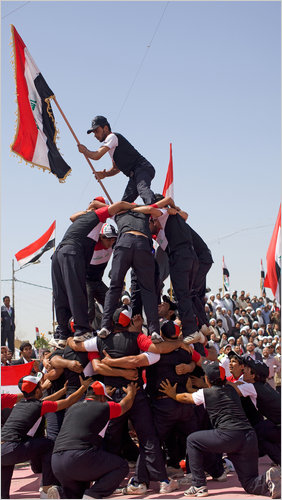 Now the Army Times is announcing Obama plans to send a few thousand more troops as the supposed deadline looms:

More than 7,170 soldiers will deploy to Iraq beginning in mid-summer — despite a security agreement that requires U.S. forces to depart the country by Dec. 31.

The deployments are part of the regular rotation of forces and will include a division headquarters of 775 soldiers and two brigade combat teams totaling 6,400 soldiers, according to a Defense Department announcement Tuesday.

The soldiers will begin deploying in mid-summer and continue through the fall.

The establishment never intended to pull the troops out of Iraq. They didn’t build permanent bases and a whopping embassy there for nothing.

This will be a non-issue as we head into the 2012 dog and pony race to select the next teleprompter reader.

Just as the phony death of CIA asset Osama bin Laden is now being used to argue in favor of expanding the bogus war on engineered terrorism, the remaining troops in Iraq will be cited as an effort to stem the tide of terror, most notably from Iran.

Last week the mantlepiece of pro-war propaganda, the “liberal” New York Times, said Shiite militants and followers of the anti-American Shiite cleric Moktada al-Sadr are working for Iran and are a threat to a peaceful “transition” in Iraq.

“These Shiite militias have emerged as perhaps the greatest threat to the 46,000 United States troops still in Iraq, military officials say. And a barrage of recent attacks — some of them deadly — has raised questions about the safety of Americans as the military withdraws troops and equipment in the months ahead,” reports the newspaper.

So don’t expect the troops to come home any time soon. The neocon war against Muslims and Arabs is not finished yet. Remember what Darth Vader – excuse me, Dick Cheney – said: the war could go on for generations, possibly forever.